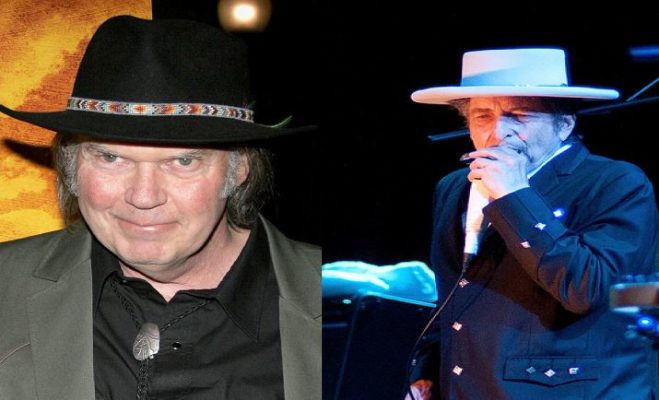 Neil Young and Bob Dylan have been confirmed as double headliners for a show in London’s Hyde Park July 12th, 2019. The co-headliner is part of the British Summer Time concert series.

The special show will herald the first time the music legends shared a bill since they joined forces for ‘Desert Trip’ back in 2016. The two musicians are longtime friends that first shared a stage playing the SNACK Benefit concert at San Francisco’s Kezar Stadium in March of 1975.  The annual British Summer Time concert in Hyde Park is one of the most prestigious events that take place during the summer festival circuit.

It spans two weekends and has played host some of the biggest names in rock and pop during the last five years. Black Sabbath, The Who, The Rolling Stones, Roger Waters, Taylor Swift, Eric Clapton and Paul Simon have all graced the London stage. Neil Young and Crazy Horse played in 2014, however, this is Dylan’s first time performing at the event.

The show is the first event that Bob Dylan and Neil Young have announced for 2019. Young will be joined by Promise of the Real. For Dylan, this year was the 30th anniversary of his Never Ending Tour. This Hyde Park event is the first clear indicater that it’s going to continue into its 31st year. Tickets go on sale this Friday.

Kings Of Leon To Send An NFT To Space For Charity