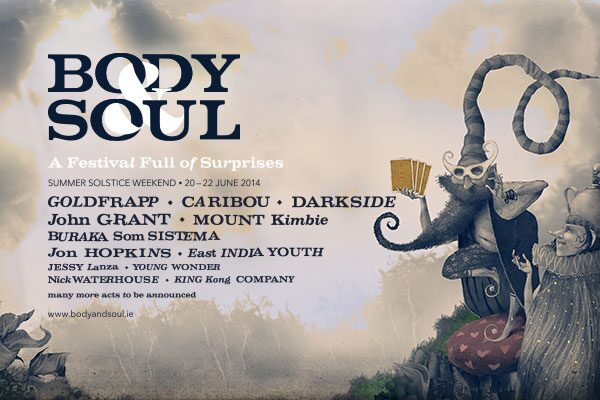 To celebrate FIVE STELLAR YEARS on the Irish festival scene, Body&Soul has a few very special cards up its trademark sleeve for 2014.

Upturning its TRUMP CARD this morning, the multi-award-winning festival signals the first of its exciting line-up announcements for this year’s Summer Solstice weekend, June 20 – 22, set across the unforgettable backdrop of Ballinlough Castle, Co. Westmeath.

Set to headline the festival are über-glam stars GOLDFRAPP who have spanned a fifteen year career creating fantasy environments in their music to reach what is now their celebrated sixth album. Bringing their unique, mesmerising soundscape to Ballinlough. Expect stunning visuals, explosive beats and the spine-tingling vocals of Alison Goldfrapp to set the tone for the entire festival.

Canadian compositional genius CARIBOU will unpack his upbeat 1960’s sunshine pop to bring festival-goers soaring from their feet. The regal baritone of American singer-songwriter, cult hero JOHN GRANT will fill the air with songs from both his award-winning albums.