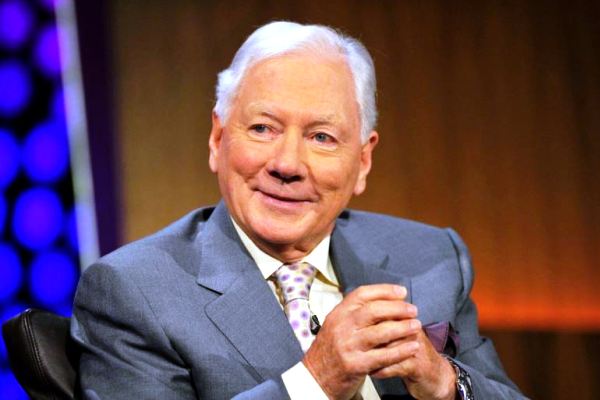 Gay Byrne has died at the age of 85. He forged a legendary career in Irish broadcasting, best known for hosting The Late Late Show.

He is survived by his wife, broadcaster Kathleen Watkins, daughters Suzy and Crona and their families.

Born in 1934, Gay Byrne would go on to forge a legendary career in Irish broadcasting, which touched the lives of millions.

Starting out with a 15 minute slot on Radio Eireann, he would go on to work in the UK for both Granada and the BBC, before landing his defining role.

Although conceived as a light entertainment show, the programme never shyed away from subjects which challeneged the views of a conservative Ireland:

Viewers were captivated – whether it was the Bishop and The Nightie scandal, Byrne’s compassionate response to calling a competition winner whose daughter had just died, and the hosts refusal to shake Gerry Adams hand.

Byrne would also give a platform for Irish artists such as U2, Sinead O’Connor and Boyzone:

Gay Byrne would remain at the helm of the Late Late until 1999.

Millions would also allow the Dubliner into their homes through the airwaves, with the Gay Byrne Show running on RTE Radio 1 for 25 years, and Uncle Gaybo presenting other favourites such as Who Wants to be a millionaire, and the meaning of life.

President Michael D Higgins has paid tribute to the broadcaster.

He described Gay Byrne as a man of great charisma, who was possessed of effortless wit, charm, and who had a flair for broadcasting.

He said through his work in radio and on television he challenged Irish society, and shone a light not only on the bright but also the dark sides of Irish life.