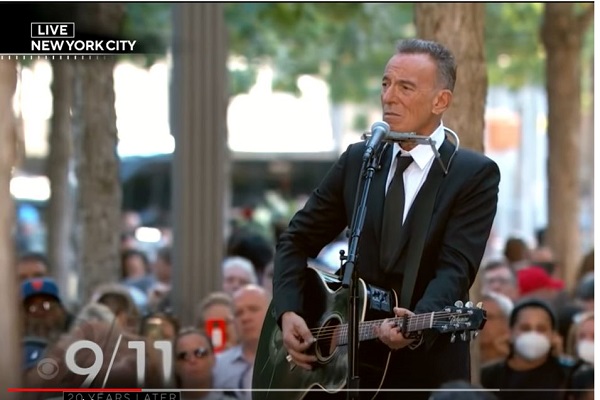 Bruce Springsteen performed at the 20th anniversary memorial ceremony for 9/11 in New York over the weekend. Check it out below.

For this performance, Springsteen sang an acoustic cover of “I’ll See You In My Dreams”. This song features on the Boss’ album “Letter To You”.

On Saturday 11 September, families of the victims of the terrorist attacks that killed nearly 3,000 people gathered at the memorial in Lower Manhattan.

Also in attendance at this ceremony were US President Joe Biden along with former presidents Barack Obama and Bill Clinton. Their current spouses also attended the memorial Jill Biden, Michelle Obama and Hilary Clinton.

Springsteen appeared at the ceremony, where he adressed the crowd, “may God bless our fallen brothers and sisters, their families, their friends and their loved ones”.

Check out Springsteen’s rendition of “I’ll See You In My Dreams Below”.

Following those tragic terrorist attacks in 2001, Springsteen returned to his studio with the E Street Band for the first time in two decades.

Not long after, Springsteen released his 12th studio album “The Rising”.

Back in July, the Boss said that he hopes to return to touring next year.

“We’ll be touring next year if everything goes well”, he said.“The E Street Band will be back on the road – you know, depending, of course, on the virus and what’s opening up”.

Jessica also revealed that she called her parents following her Olympic success.

I Facetimed them really quickly. They were screaming; I couldn’t understand anything that they were saying,” she said. “It was all smiles. I saw the Team USA gear they were wearing. I couldn’t work out what they were shouting, but I just know they are so excited”, she said. More on this here.