Home News Campaign To Ban Zero-Hour Contracts Has Been Launched 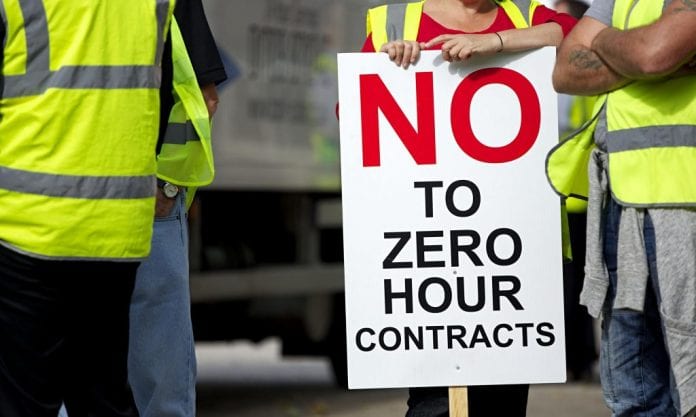 A major campaign to ban zero-hour contracts has been launched by one of the country’s biggest trade unions. Mandate claims more than 100K workers are employed using them.

They’ve now written a charter that bosses can follow to give staff security over their hours and incomes.

Muireann Dalton is a Mandate representative at Dunnes Stores; She’s on a flexi-contract of 15-38 hours a week.

“You’ve all these different problems with childcare – you’ve all these problems that people in a regular job don’t have to worry about. Even down as far as your bus fare.”

The Mandate trade union is calling for a ban on these, along with zero-hour contracts where workers don’t know what their hours and incomes will be or if they’ll be working at all.

The union says tens of thousands of workers in many sectors – in retail, hospitality and the media are employed using them, and can have their hours and incomes slashed from €400 to €160 a week.

John Douglas is General Secretary of Mandate, he says some bosses use the roster as a form of punishment:

“If somehow or another you fall foul of the manager or you do something maybe semi-wrong, they can slash your hours. It’s probably a way of getting rid of you at the end of the day.”

The Banded Hours Contract Bill has already been passed through the Dáil and is at committee stage but Muireann Dalton says there needs to be action now:

“Security for hours for all workers – to ban the zero-contracts now. To bring the legislation through now. We need action now – not in two years time. We have waited a very long time for any bill to come even though people are suffering out there.”

As part of it’s campaign, Mandate has launched a list of guidelines companies can follow to give staff more security.

Trump Orders Creation Of ‘Garden Of American Heroes’ Is Strange