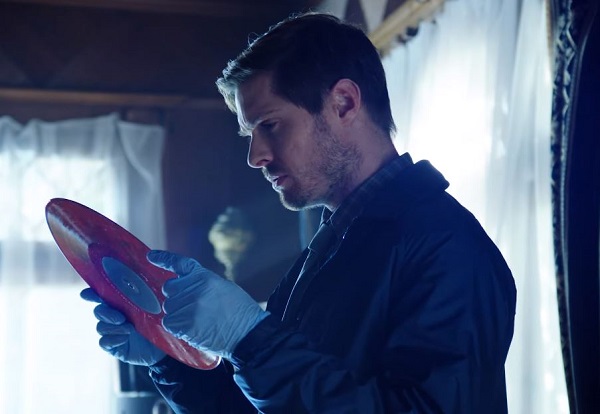 The trailer for new TV series Deadwax, a tale of a vinyl record that kills, has been released. The series will be available on Shudder, a streaming service dedicated to films and programmes of the horror genre. The trailer for the horror is below.

Deadwax was realised by Graham Reznick, who has worked as a sound designer on the likes of The House Of The Devil and The Sacrament. It draws its inspiration from the name for the space between the last song and the label itself on a vinyl record. Here, music legends have been suspected of  “backmasking” where backward messages are hidden in a recording.

The series explores the question, “What if the vinyl itself could cause harm just by putting the needle to the groove?” According to a synopsis, “Deadwax delivers a creepy and stylish tale of Etta (Hannah Gross, Mindhunter), a young woman who works as a scavenger of scarce records for rich clientele. She’s got a gift for tracking down the rarest of the rare, even if it involves a little breaking and entering. Her most recent score includes an especially unusual piece, legendary in collectors’ circles: a “key” record from master sound engineer Lyle M. Lytton, and one of only three in existence.”

“She sells it off to one of her usual high bidders, but her curiosity goes into overdrive when the police discover that one of these records — identified by its strange, ominous marks in the space between the grooves and the label, also known as the “deadwax” — is linked to the death of another record collector. That gruesome demise puts the law and Etta on the same track, trying to unwind the mystery behind these wicked acetates.”

Each instalment in the eight-episode season is only15-minutes long, which producers claim to make it “laser-focused on its menacing tone and mystifying puzzle”. It will debut at Austin’s Fantastic Fest this weekend (September 23). Here’s the trailer.

Video: Music Show At US Restaurant Results In $1,000 In Damages!