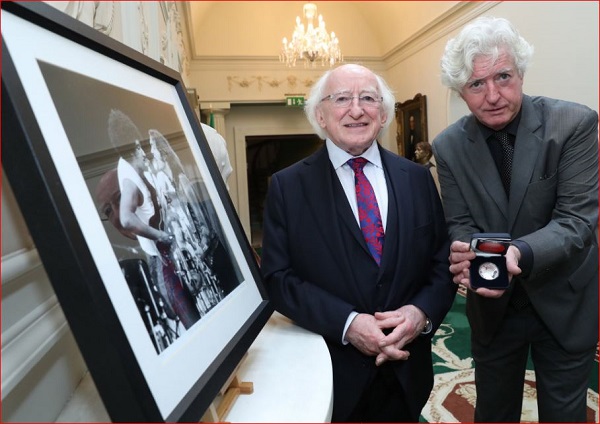 President Michael D Higgins has been presented with a €15 commemorative coin featuring an image of the late guitarist who died in 1995, aged just 47. Cast in sterling silver, the coin shows Gallagher playing the guitar against a backdrop of a vinyl record over an image of a map of the world. The limited edition coins cost €60 and 3,000 will be issued.

The first coin in the series was presented to Mr Higgins at Áras an Uachtaráin by the governor of the Central Bank Philip Lane in the presence of Rory Gallagher’s brother Dónal Gallagher. Speaking about the Rock musician Mr Higgins said the guitarist represented the “very best aspirations of our republic”.

Mr Higgins also said societies have long sought to acknowledge what is important to them in their coins. He cited the appointment of the poet WB Yeats in 1927 as the chair of the Currency Commission which chose designs for Irish coinage in the new State. The commission decided on animals as the best symbol for the nation.

Mr Higgins concluded,  “In our time, I would ask, what better symbol could we find for our creative, artistic, freedom-loving country than an image of one of our most iconic musicians, Rory Gallagher? Rory was not only popular for his ability – though he was one of the greatest musicians of his age. As all who knew him will tell you, he was warm, generous, kind and compassionate – indeed so much so that he belied all the stereotypes of the ‘rock star’. At concerts, he was never distant but was always glad to be among those attending, before and after.”

The coin is one of three representing Irish musicians which will be issued. The ‘Modern Irish Musicians’ series will also include silver coins of Phil Lynott in 2019 and Luke Kelly in 2020.

Irish President, Michael D Higgins, today hosted an event to mark the unveiling of a new commemorative coin in honour of the legendary Irish guitarist Rory Gallagher. Produced by the Central Bank of Ireland, it’s the first in a series of three honouring modern Irish musicians. pic.twitter.com/nFxx3XAtSc

Ozzy Osbourne Has Confirmed Plans For A Final Tour