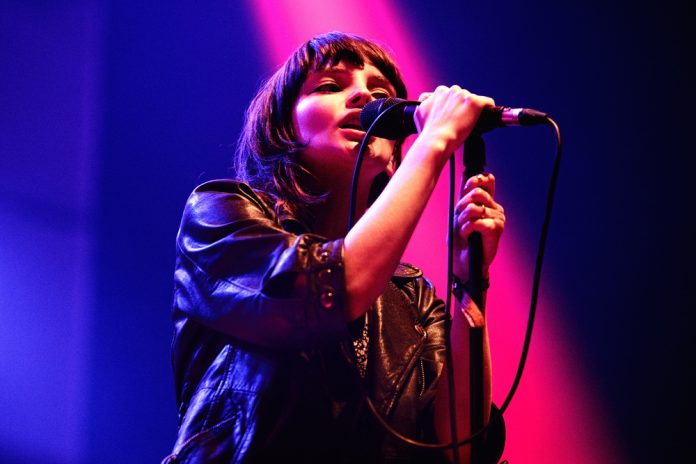 That was after the band discovered that the electronic music producer had worked on a project with Chris Brown and Tyga on a new track called “Light It Up”. Both Brown and Tyga have criminal records from various allegations of sexual misconduct.

Brown lashed out at CHVRCHES online by calling the synthpop band “the type of people I wish walked in front of a speeding bus.” Brown’s fans then started a tirade of abuse at the band and lead singer, Lauren Mayberry.

They made violent rape and death threats against the band and specifically at frontwoman Mayberry. The frontwoman shared screenshots of these horrifying threats online.

One poster said she should: “Keep Chris Breezy’s name out your KKK, cracker whore mouth” or “ima come and bash your fucking skull in.” While another disgusting poster wrote, “I hope tyga rapes you, then chris brown beats the shit out of you, then R Kelly comes and pisses on your white ass.”

Whore, cunt, bitch and the KKK all in one sentence. Do I get a prize? Bingo? Someone saying they will “bash your skull in” for denouncing domestic abuse is somewhat ironic… #NotSorry pic.twitter.com/CY3wRBfnTi

Mayberry replied: “Whore, c**t, bitch and the KKK all in one sentence. Do I get a prize? Bingo? Someone saying they will “bash your skull in” for denouncing domestic abuse is somewhat ironic… #NotSorry.”

At the outset, it seemed that Mayberry was able to laugh the comments off. Writing on Twitter over the weekend she said: “Angry men on the internet can call me all the names they want. I still think domestic abuse is wrong.”

The last “bitch” really helped get the point across 🤣 Angry men on the internet can call me all the names they want. I still think domestic abuse is wrong. Peace out, internet. Tomorrow is a brand new day. pic.twitter.com/CEh4HijD6J

Since then though CHVRCHES now appear to be genuinely shaken by the threats from Brown’s and Tyga’s fans.

According to CoS, in a since removed Twitter exchange between Laura Snapes, the Deputy Music Editor of the Guardian and Mayberry it came to light that the band are now employing extra security at their shows.

It’s reported that on Monday, Mayberry said they have had to hire increased security because of the horrible online comments. The singer also admitted that she no longer feels safe at her residence:

“I am not staying in my own home when we finish tour because the threats we have received have reached such a scale. We have to have the police at our shows now. If that’s what I deserve for saying mainstream music should be more morally conscious, then so be it.”

Mayberry said at a recent show that the backlash she’s received from Brown’s fans was proof of the kind of person that Brown was. She also said that it indicates the type of behaviour that he condones through his actions:

“We were like, ‘maybe don’t promote serial convicted violence to kids… to young people.’ And they were like, ‘well, you know what we’re going to do? We’re going to rape you and shoot you.’ And I was like, ‘oh, you kinda proved the point though.’ So, in a way, I’m like, ‘thanks’.”

Marshmello, the collaborator at the centre of the scandal who has not released any comment.

Tyga however, adopted a more diplomatic tone in response to CHVRCHES’ online criticism. He wrote on Instagram last week. “Where [sic] all God’s children. Everyone makes mistakes no ones perfect. Let’s Keep the energy positive.”

However, he hasn’t yet commented on the threats aimed at Mayberry and CHVRCHES.

Kurt Cobain memorabilia for sale turns out to be a hoax