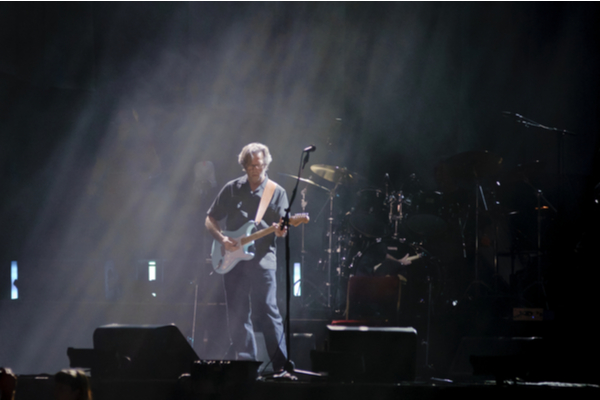 The war of words between Eric Clapton and Rolling Stone magazine rambles on as the guitarist hits back. The pop culture magazine has been accused of running “slur campaign” against him because of his controversial views on COVID-19 vaccination and lockdown mandates.

Speaking in an interview with prominent anti-vax advocate Robert F. Kennedy Jr., Clapton said “Over the past year, there’s been a lot of disappearing, you know — little dust around with people moving away quite quickly. And it has, for me, refined the kind of friendships I have.” The guitarist adds that the last few years have been made especially difficult by the “mainstream media turning” on him.

Clapton also praised Van Morrison, with whom he collaborated on the anti-lockdown song Stand and Deliver last November. “I had been inspired by Van because he came straight out and his reasoning was, ‘We have to make music for people,’”.

“He’s a crusader, he sees it as his calling,” Clapton said. “And I thought, ‘That’s right, people are not really acquainted with the idea that this is as important in their healing as any kind of medicine’. The whole community thing of people with being together with music.”

“Controversial” views of COVID-19 have cost the guitarist several friendships, with his most recent loss of bluesman, Robert Cray. The musician cancelled his plans to tour with Clapton and has confronted him via email for Stand and Deliver lyrics comparing vaccine mandates to slavery. In June, Clapton and Morrison released another collaborative protest song, The Rebels, with the guitarist also releasing politically charged solo tune, This Has Gotta Stop, in August.

The guitarist was recently the subject of a damning Rolling Stone exposé which revisits the racist onstage remarks he made in 1976. Although the article details the extent of his “anti-lockdown” advocacy, Clapton seemed unbothered by the negative press.

“When I realized that there was a parting of the ways, it only made me determined,” Clapton told Kennedy. “To come up to date with the new Rolling Stone kind of slur campaign, it becomes a compliment when it’s coming from certain areas of the media. It’s just an affirmation to me that I’ve been doing the right thing.”

Clapton, who recently completed a U.S. tour of primarily red-state venues which did not require proof of vaccination, said the criticism has only emboldened him in his beliefs. “It’s funny, because they can say stuff about me, but I actually haven’t felt physical opposition. I’ve felt more support as a result of this than I ever did before about anything.”