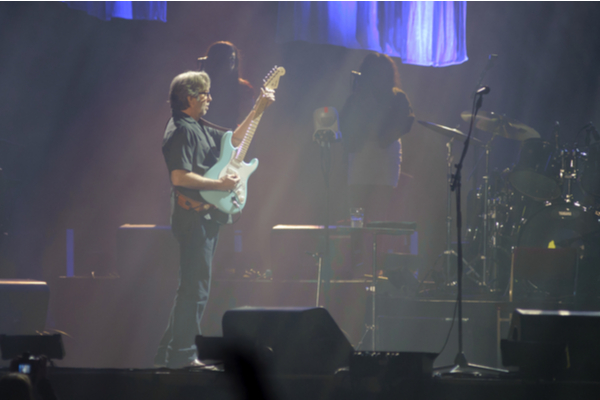 Friends and collaborators of ‘the Clap’ have been discussing the rock legend’s anti-lockdown stance and are now defending him against allegations of racism. The actions of Eric Clapton have been well documented in reports from his comments to a string of anti-vaccine and anti-lockdown tracks.

Reports have captured his decent which has gone on from just speaking on the matter to actually bankrolling it. Associates of the musician have been similarly confused by his recent stance, with many labelling Clapton as largely unpolitical.

Former label manager Bill Oakes told the Washington Post, “He’s the anti-Bono! He is the epitome of someone who is there for the music, and he’s never rubbed shoulders with world leaders and never wanted to.”

Rolling Stone followed the musician’s U.S. tour, where he specifically sought out venues where mandates did not apply. Along the way, Clapton performed a series of shows in Texas; Governor Greg Abbott — himself opposed to mandates — stopped by backstage and shared a photo with the guitar god on social media.

Following that photo, people quickly accused Clapton of supporting Abbott and Texas’ strict abortion bill, leading his business manager, Michael Eaton to report to the Washington Post. “He is a great believer in freedom of choice, which drives his position on vaccinations, and his views on other matters would reflect that belief in freedom of choice”.

Producer of Clapton’s Unplugged – as well as his pandemic-recorded Lady in the Balcony: Lockdown Sessions, – Russ Titelman – told the Washington Post that the sessions were nearly derailed when Clapton wanted to perform his anti-lockdown song Stand and Deliver for the LP; the record label ultimately rejected that plan.

Stand and Deliver also caused a rift between Clapton and blues great Robert Cray, who was originally recruited to open on Clapton’s U.S. tour.

Song lyrics likened the COVID lockdown to slavery — “Do you wanna be a free man/Or do you wanna be a slave?/Do you wanna wear these chains/Until you’re lying in the grave?” Such lyrics got to Cray, who got into a heated email exchange with Clapton over the track. Cray would eventually cease communicating with Clapton and drop off his tour.

Although his associates are confused over his stance, Clapton has been defended against allegations of racism, claiming the infamous 1976 Birmingham concert and its “full-tilt racist” rant was an isolated incident.