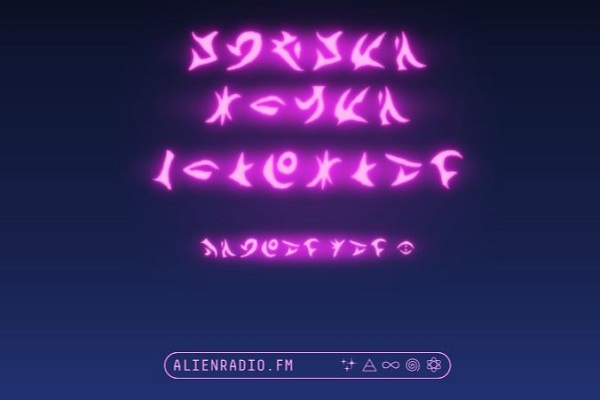 British rock band, Coldplay have cryptically teased details of a new project called Alien Radio, sending fans into meltdown. The band shared a brief clip on social media which shows the band presenting a series of mysterious purple symbols over a static radio signal. Fans were also invited to visit a website called AlienRadio.FM to learn more about the cryptic messages.

Once on the website, fans are greeted by a rotating globe in the centre of the screen, urging to find a signal. Moving the cursor across the globe allows fans to access a selection of multi-lingual messages. ARGN notes they range from advertisements for satellite launches to excerpts from classic literature such as Sherlock Holmes’ Adventure of the Dancing Men and Alice’s Adventures in Wonderland.

As the mysterious signal beams down, it has brought fans into a frenzy by attempting to decipher its true message. As fan account Coldplay Xtra notes, the mysterious symbols can be decoded to hint at a new release from the band next month: COLDPLAY HIGHER POWER, MAY SEVEN.

There is also a section of scrolling text on the top of the website, providing a long phrase Coldplay fans suspect to be lyrics. “This joy is electric and you’re circuiting through / I’m so happy that I’m alive happy I’m alive at the same time as you”.

As well as this strange, cryptic online presence, the symbols have also been seen across the globe. The alien language has been spotted on digital billboards in places like New York, London, Santiago, and Seoul. Coldplay have still not confirmed an upcoming release, but they gear up to perform at Glastonbury’s special livestream event from Worthy Farm next month.

It was reported earlier this year that Coldplay were working on a new album called Music Of The Spheres. A source close to the band revealed that the band have been recording new music throughout lockdown, which will be their ninth studio album.

“Coldplay have been dropping hints for a while but now it’s finally getting off the ground,” the source said. “They’ve been busy working on new music during lockdown and it’ll all culminate in the record, which has the working title Music Of The Spheres.”