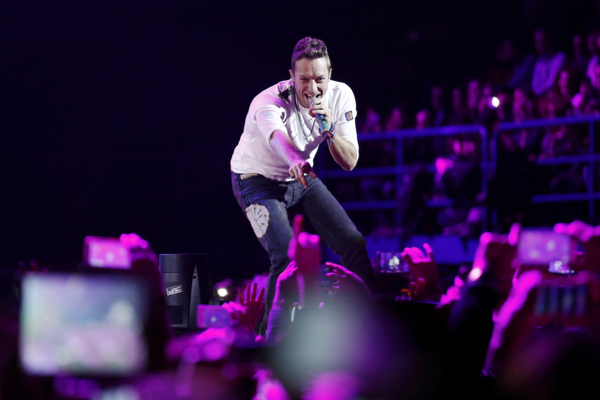 Coldplay have responded to claims that they are being used as “useful idiots for greenwashing”, as they pursue an eco friendly world tour.

The band are currently on their ‘Music of the Spheres’ world tour. While their plan is to minimise their carbon footprint, Coldplay have also been criticised over the companies they have partnered with for help.

Coldplay have received strong flack for joining forces with companies like Neste and BMW.

BMW have supplied rechargable electric vehicle batteries to power their tour shows. However, it has also been reported that BMW are an influential lobbyist for the car industry in Germany.

Senior campaign manager Eoin Dubsky has claimed that Coldplay have been “taken for a ride”.

Dubsky also added, “BMW is lobbying to prevent the EU from setting a deadline of 2035 for vehicles to be zero emissions only and they have been able to use Coldplay”.

On top of this, Coldplay have also partnered with Neste, cutting their emissions by half. They are also the largest producer of sustainable biofuels worldwide.

However, it also emerged that the company’s palm oil suppliers have cleared at least 24,710 acres of forest in countries like Malaysia and Indonesia between 2019 and 2020.

“This is a company that is linked to the kind of deforestation that would appal Chris Martin and his fans. It’s not too late, they should drop their partnership with Neste now and focus on truly clean solutions instead”.

The company have also called marking cooking oil out as sustainable “dubious”. Studies indicate that EU supplies are imports from countries such as China and Indonesia.

They also added that using animal fats in cooking oil are linked to agricultural methane emissions. Most fats also come from industrial farming.

The average carbon footprint for this tour has been cut by half from Coldplay’s last ‘A Head Full Of Dreams Tour’ from 2016-2017.

Their 12 point eco plan wants to “eliminate the use of fossil fuels” in show production and land freight.

“When we announced this tour, we said that we would try our best to make it as sustainable and low carbon-impact as possible, but that it would be a work in progress. That remains true. We don’t claim to have got it all right yet”, the band said of the criticism levelled at them from Neste.

“Before we appointed Neste as supplier of these biofuel products, we received their guarantee that they do not use any virgin materials in their production – most especially not palm oil. It’s still our understanding that they use renewable waste products only, like cooking oil and byproducts from wood pulp manufacture”.

Responding to the criticism from BMW, Coldplay insisted that they had consulted with other car manufacturers. But “BMW were the ones that offered to help”.

“We have no connection to or influence on their corporate policies,” Coldplay added. “We just need their batteries so that we can power our shows with renewable energy”.

They added, “we are doing our best, and always genuinely welcome suggestions as to how to do it better”.

Back in February, Liam Gallagher had claimed that Coldplay were “not rock”. More on that here.