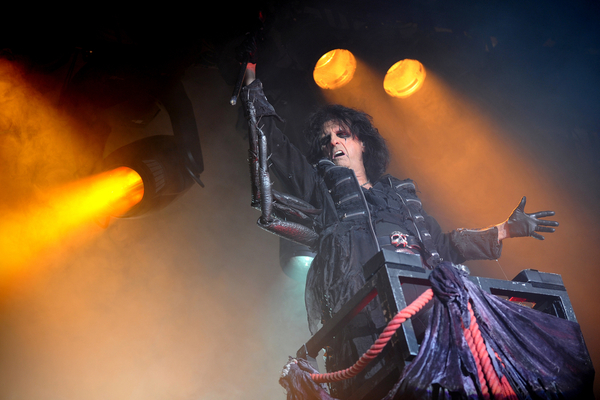 Everyone’s favourite shock-rocker, Alice Cooper has revealed he is currently working on releasing two, new hard rock albums. The soon-to-be 74-year-old will record his 29th and 30th studio albums simultaneously, less than a year since his last release.

Speaking recently on Eddie Trunk’s Trunk Nation, Cooper shared details on current recording plans, while revealing what fans can expect from the new records. As bubbly as ever, the Feed My Frankenstein rocker revealed that he is “working on two albums right now”.

“One is… totally written, and we’ll be doing bed tracks for that one pretty soon. The other one is just a touch in the future, but that’s being written right now too. They’re two entirely different kinds of albums, but they’re Alice Cooper, pure rock’n’roll albums,” he continued. “The two albums will really be hard rock albums.”

With his 74th birthday around the corner, the veteran rocker is not showing any signs of slowing down just yet. The artist, formerly known as Vincent Damon Furnier, has recently released a spoken word record, entitled Alice Cooper and the Tome of Madness. We can find him reading a 16-minute horror tale, issued via rock and metal licensing company, Metal Department, which arrives on a 12″ vinyl disc.

This release is a companion effort to the licensee’s 2021 online slots game that shares the same name. Cooper’s …Tome of Madness record is available on black or yellow vinyl in a limited edition of 500 copies each, sold here.

These two, upcoming albums follow last February’s Detroit Stories, with Cooper’s next release scheduled to arrive sometime this year. The 74-year-old will also perform a joint headline tour with She Sells Sanctuary rockers, The Cult, and a selection of festivals.

Such generosity is fitting for a man of Alice Cooper’s charm, however, as he always finds ways to give back to the world. Just last month, Cooper revealed he has taken care of his crew during the coronavirus pandemic by thoughtfully setting money aside. As his two biggest fans would shout, WE’RE NOT WORTHY!!