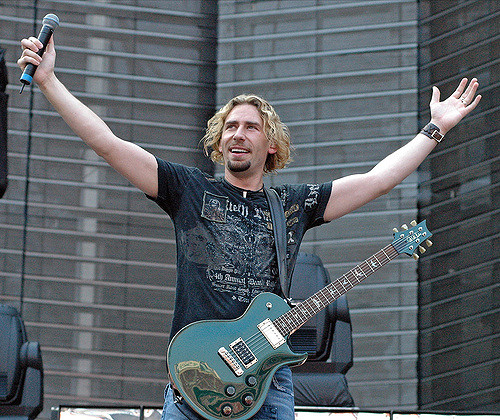 For the love of all that is holy, when will Canadian heart throb Chad Kroeger and Corey Taylor just kiss and make up?

The ongoing feud between the two men shows no signs of slowing down. Although Taylor has come out and clarified for all of us worried, that his beef is with Kroeger, and not with the rest of the band. Praise jebus!

After insults were sent out by the former lurver of Avril Lavigne, Taylor spoke to Philadelphia radio station 93.3 WMMR to let us all know the real deal. Taylor said Kroeger’s bandmates had immediately called him to say sorry when the comments were published. “That just tells you the level of ego you’re dealing with,” Taylor said.

“And I’ve said this since day one – it’s not the [rest of the] band. As soon as that story hit, the band called and apologised. They were like, ‘It’s not us, we promise. It’s this guy. We don’t…’ And I had hung out with the band before and they’re super-cool dudes.”

He added: “I don’t want people holding it against the band, because it’s not them. It’s Captain Ego from Planet Douche.” Which we personally feel is literally the most genius insult we’ve ever heard.

For those who haven’t been following the back and forth war of words between the two, we commend you on having a life. We however don’t, so we’ll give a quick lowdown.

In an interview with Metal Convenant a few months back, Kroeger showed us what a  four year old girl he can be when he described Corey Taylor ’s band Stone Sour as “Nickelback lite” and Slipknot as being a “gimmick”.

After the interviewer suggested that Taylor’s Stone Sour project was as diverse as Nickelback, Kroeger replied: “Yeah, because they’re trying to be Nickelback… They’re okay, but they’re not as good as Nickelback. They sound like Nickelback Lite.”

He went on to lament slipknot for never having a number one hit and said that they had to use masks to make up for their musical output.

Of Slipknot, Kroeger said: “They had to put on masks and jump around. How good can your music be if you’ve got to beat each other up on stage, throw up in your own masks every night?” Arguing that “music shouldn’t come with a gimmick,” Kroeger said of Taylor: “He got tired of sitting behind a mask — he wanted people to know what he looks like — so he started Stone Sour.”

Now, if you’re thinking that was pretty harsh, don’t worry, of course Taylor fired back. This isn’t the first time Taylor has addressed Kroegers words. Pretty shortly after Kreogers interview, Taylor spoke to 98 KUPD and let them know exactly how he felt.

“I was sitting there trying to figure out how I was going to handle this, because it’s so funny,” Taylor remarks of Kroeger’s comments about Stone Sour and Slipknot. “I don’t know what the hell planet he’s living on. Apparently, it’s planet Kroeger, and there must be good weed there, cause he’s an idiot.”

Oh but wait, it got better. He went on to declare his love for the rest of the band and then delivered one of his classic Corey Taylor burns towards Kroeger.

“I love all the dudes in that band. I love Mike [Kroeger]. Everybody else in that band I’m very, very cool with; I’ve hung out with them. It’s just ‘Face Like a Foot’ who I can’t really hang out with. He’s got a face like a foot. Am I wrong? … So, dude, curl up in bed with your Hello Kitty pillow and shut up.”

Light Up Faces This Christmas With A Simple Text