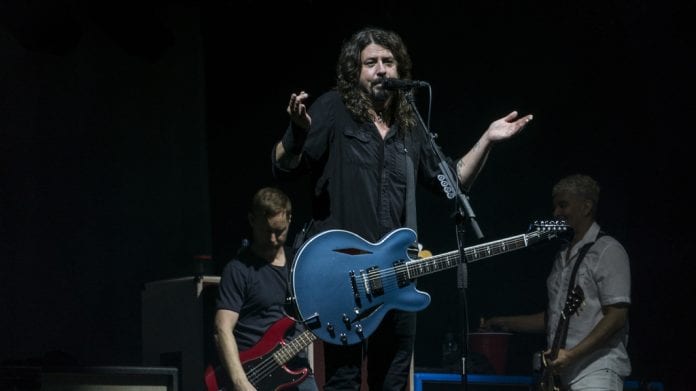 Dave Grohl is known as a being one of the soundest guys in the music world. Who will ever forget that he broke his leg on stage and got back up to finish the gig while a paramedic held his leg in place?? Well he’s just made another sound Grohl move.

The rocker was photographed backstage at a Foo Fighters gig in Washington DC, last Thursday the 12th of October… giving a fan his shoe. Bit strange? Yeah. But it’s actually quite sweet.

The fan was meeting Grohl and was on crutches. Foos fan Sabryn, who shared her encounter with the Foos on Twitter @SabrynSucks said that she met Dave Grohl’s orthopaedic doctor that night too.

Apparently the doctor told her that her foot would not get better if she didn’t put a shoe on it, so naturally Grohl stepped in to give Sabryn one of his own shoes.

tonight dave grohls orthopedic doctor told me if i didn't put a shoe on my foot it wouldn't get better. so dave gave me one of his shoes? pic.twitter.com/updeujumtx

She spoke to Alt Press after the encounter: “Dave brought him [the doctor] out once he saw that I was on crutches, and that’s when his doctor mentioned that I was supposed to wear a shoe with my brace.”

“I told him that my shoes didn’t fit over it because it’s pretty big and my shoes are kinda small. So Dave said, ‘You need one of my big high tops!’ and I laughed it off.”

“I wore it for the rest of the night after Dave told me to put it on,” Sabryn said. “It’s definitely one of the coolest things to ever happen, and probably the funniest”.
We take our hat (& shoes) off to you Mr Grohl, forever a legend.
Photo Credit: Raph_PH