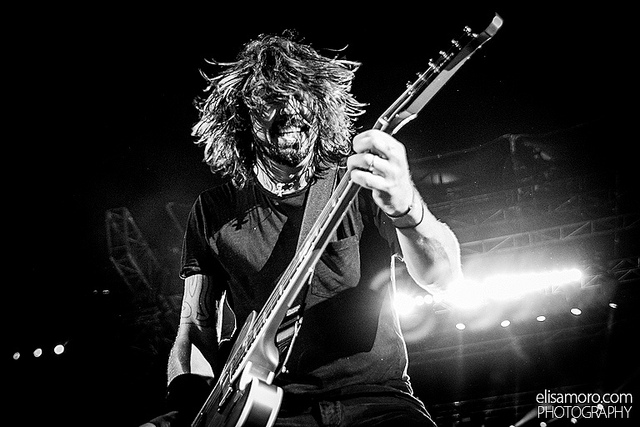 The Foo Fighters frontman presented KISS with an award at the ASCAP Pop Music Awards and spoke of how they inspired him.

Dave Grohl honoured KISS band members Gene Simmons and Paul Stanley with the ASCAP Founders Award recognising their influence as a song-writing team. During his speech Grohl spoke about the influence KISS had on him saying the band “ultimately inspired me to follow this unreasonable dream of becoming a professional rock ‘n’ roll musician”.

Speaking about the KISS’ 1976 LP Destroyer Grohl said “Everybody remembers their first KISS record and this is how I remember mine. With nuclear anticipation, I let the needle drop on that legendary intro to ‘Detroit Rock City,’ perhaps the greatest introduction to any rock & roll album ever recorded. It filled my speakers and my imagination. Thirty-four minutes later and 27 seconds later, KISS had filled my soul. I was now a member of the infamous KISS Army.”

Grohl continued on saying that his bedroom became a shrine to KISS with posters lining his walls and KISS albums taking over his record collection. “Every morning, I would wake up in my tiny bedroom and take a good look at my superheroes before walking to school.”

When accepting the award, KISS’ Gene Simmons spoke of the respect he had for the Foo Fighters frontman saying “Dave Grohl and the Foo Fighters are carrying the flag that we hope will inspire the next generation of young kids.”

Noel Gallagher Feels Happier Solo Than When Touring With Oasis