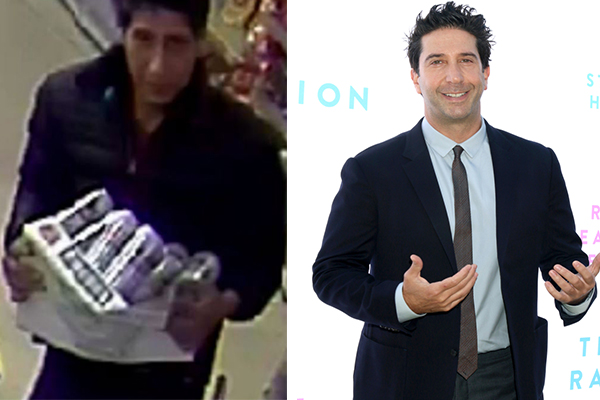 David Schwimmer has responded to reports that Blackpool Police are hunting for a suspect who “looks like Ross from Friends. The Friends star went so far as to make a reconstruction video of himself in a Deli in New York to prove his innocence.

On October 23rd, the police released an image of an alleged thief and people couldn’t help but notice the similarities between the suspect and Schwimmer’s character on the ’90s sitcom.

Could there be any more Ross’ pic.twitter.com/HTYKVKqC0v

The photo was bombarded with comments about the crook’s resemblance to the Friends actor. Many people started quoting phrases from the sitcom.

Perhaps he was on a break?

Schwimmer confirmed he was in New York at the time the crime was committed. Taking to Twitter, he wrote: “Officers, I swear it wasn’t me. As you can see, I was in New York. To the hardworking Blackpool Police, good luck with the investigation. #itwasntme”.

The tweet included footage of the actor in a grocery store, with a slab of beer and looking dodgily at the camera.

Officers, I swear it wasn’t me.
As you can see, I was in New York.
To the hardworking Blackpool Police, good luck with the investigation.#itwasntme pic.twitter.com/EDFF9dZoYR