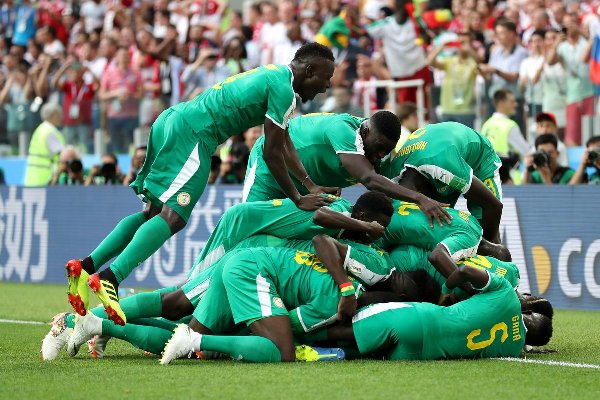 Senegal become the first African team to win a game at Russia 2018, and it’s their first World Cup finals victory since 2002.

There was controversy about the Lions second goal. M’Baye Niang sprinted back on to the field of play after injury and immediately intercepted a backpass from midfield, beating former Arsenal goalkeeper Wojciech Szczesny and Southampton defender Jan Bednarek to the ball.

He then slotted into an empty net – amid angry Poland players, who protested in vain to referee Nawaf Shukralla.

Aliou Cissé’s sidew took the lead in the first when Everton’s Idrissa Gueye struck shot took a massive deflection off the unfortunate Thiago Cionek to open the scoring.

A poor Poland huffed and puffed but there was a frantic finale when Grzegorz Krychowiak headed home a free-kick at the far post.

Aliou Cissé: Easily the most GIFable coach at this World Cup.https://t.co/SpcDA3dSYo

“We managed to control the game tactically and emotionally. This victory means we enter the competition in the best possible way, but we know it will be a difficult match against Japan.”

“I guarantee the whole of Africa is supporting us. I get phone calls from everywhere. We are proud to represent Africa.”

Despite the defeat, Poland head coach Nawalka remained upbeat about his team’s chances at Russia 2018.

“I think we have a lot of stamina and strength within the team to start our match against Colombia with full strength. I’m convinced we will recuperate and regenerate after this match. We will have a positive attitude in the next match.”