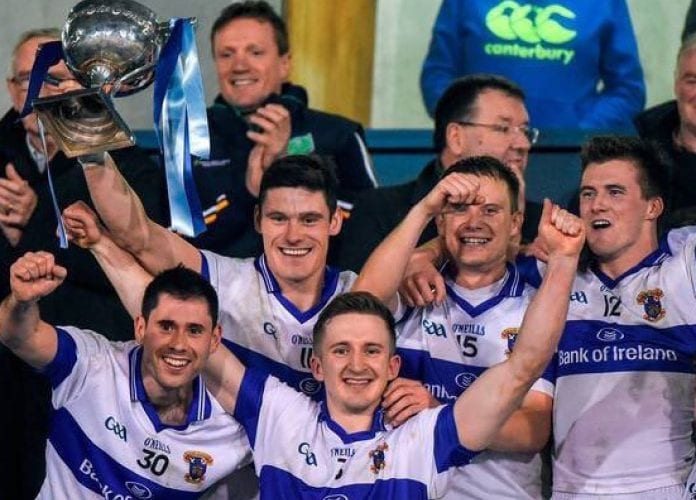 Wicklow county champions, Rathnew, pulled off the shock of the weekend when they overcame Dublin’s St. Vincents by four points.

Diarmuid Connolly led St. Vincents went into the game as clear favourites, as the reigning Leinster champions were plugged to take the spoils again this year.

Nonetheless, Rathnew provided excellent entertainment on the day, coming up trumps with a 56th minute James Stafford goal edging them over the line.

In O’Moore Park, Portlaoise were devastated to learn it was the end of the road as Kildare’s Moorefield overcame the Laois champions amid high drama.

Portlaoise had knocked out last years Leinster finalists, Rhode, in their first round and were expected to overcome Ronan Sweeney’s Moorefield.

A day of high drama in @AIB_GAA Leinster SFC means Nov 26 SEMI’S: @RathnewGAA1885 v @MoorefieldGaa ; @StLomansGAAClub v @simonstowngaels Thanks to everyone who supported our games today!

However, trailing by three points with five minutes left, an Eanna O’Connor goal and late point by Niall Hurley, secured the win for the Kildare side.

Meanwhile, Simonstown Gaels of Meath won their first ever Leinster senior club game as they saw off the challenge of Wexford’s Starlights on a scoreline of 1–12 to 0-08.

And a great comeback by Westmeath’s St. Loman’s earned them the win over St. Columba’s of Mullinalaghta by 1-12 to 1-11.

The Leinster semi-finals are due to take place on November 26th as Rathnew take on Moorefield while St. Loman’s will face Simonstown Gaels.

Mourinho Not Concerned About Playing Away Game At Wembley