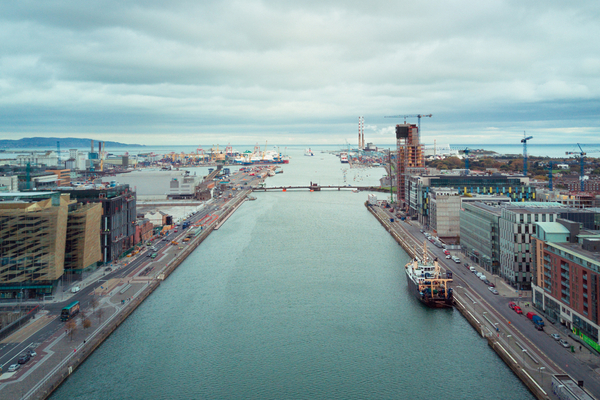 A new €400 million project has been launched by Dublin Port Company (DPC) with plans to remodel the area with ambitious planning. A new bridge is to be erected across the River Liffey, with three new public parks and five kilometres of cycle and pedestrian routes also planned.

The 3FM Project for Poolbeg Peninsula is the third and final Masterplan project for the development of Dublin Port. DPC have revealed that the new additions are set to bring the area to its final capacity by 2040. 20% of the capacity required by 2040 will be provided to one-fifth of Dublin Port’s lands through the project, at an estimated cost of €400 million.

The construction of the area, aimed to be completed somewhere between 2030 and 2035, will commence in 2026. The project, reported to be currently at the pre-planning stage, will lodge planning applications An Bord Pleanála in early 2023.

The DPC said Thursday’s launch is “the start of a detailed conversation with all stakeholders before that work begins” with the company. It is required to prepare a detailed project design, and environmental impact reports, before planning applications are lodged. DPC have said the project will include a new, private road to link the north and south port areas, taking HGVs off the public road.

Within the route, the proposed new bridge is set to be erected immediately east of the Tom Clarke Bridge. The company adds that the new route will give pedestrians, cyclists, and public transport users a less congested route for travel across the city.

Three locations on the Poolbeg Peninsula will see the development of 15.1 acres of new public parks. A 5.2-acre sailing, rowing, and maritime campus will also be erected adjacent to the existing Poolbeg Yacht Club. The DPC added that 5.5 kilometres of cycle paths and pedestrian routes will be constructed throughout the Poolbeg Peninsula.

Dublin Port chief executive, Eamonn O’Reilly said, “Masterplan 2040 projects that Dublin Port will need capacity for an annual throughput of 3.1 million trailers and containers by 2040. The 3FM Project will deliver one-fifth of this capacity by way of a new Lo-Lo terminal – 360,000 containers per annum – and a new Ro-Ro freight terminal – 288,000 freight trailers per annum.

“The 3FM Project will make a huge contribution to the provision of high-quality walking and cycling routes throughout the Poolbeg Peninsula,” he continued. “The new bridge we are proposing as part of the Southern Port Access Route will link this network across the river into the north side of Dublin Port, where we already have 10 kilometres of cycling and pedestrian routes under development.”

Details of the 3FM Project are now available to view online at www.dublinport3fm.ie. DPC is inviting people to submit comments and queries on any aspect of the project to [email protected] by December 31st, 2021.