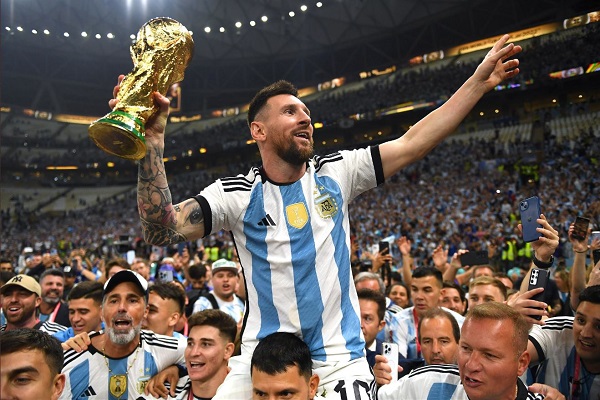 In what was their first victory since 1986, Los Blancos beat 2018 holders France in a thrilling final on a penalty shoot out.

A Lionel Messi penalty and Angel Di Maria put Argentina 2-0 ahead in the first half, and they looked set to cruise to victory. However, a quickfire double late on, including a stunner from Kylian M’bappé levelled things up, forcing the game into extra time.

A second from Messi put Argentina ahead, but another penalty from Kylian M’bappé once again pegged the South American side back, meaning that the game required penalties to separate the sides, with the match finishing 3-3 after ET.

After their goalkeeper Emi Martinez saved from France’s Kingsley Coman, and Aurélien Tchouaméni fired wide, Argentina’s Gonzalo Monteil converted the winning penalty, meaning that Argentina are World Champions for the first time in 36 years, winning 4-2 in the shootout.

Since then, the world of entertainment has reacted to this dramatic final, with the likes of Red Hot Chili Peppers’ Flea, actor Hugh Jackman, as well as singer Boy George sharing their sentiments on social media.

Wow #ArgentinaVsFrance what a match! Feel sad for France but proud for #Messi𓃵

Twitter CEO Elon Musk also had this to say.

Despite finishing on the losing side, Kylian M’bappé became the first player to score a hattrick in a World Cup decider since Geoff Hurst achieved the feat for England in 1996.

“Many congratulations to Mbappe, whatever happens”, Hurst wrote. “I’ve had a great run!”.

Many congratulations to Mbappe, whatever happens. I've had a great run!