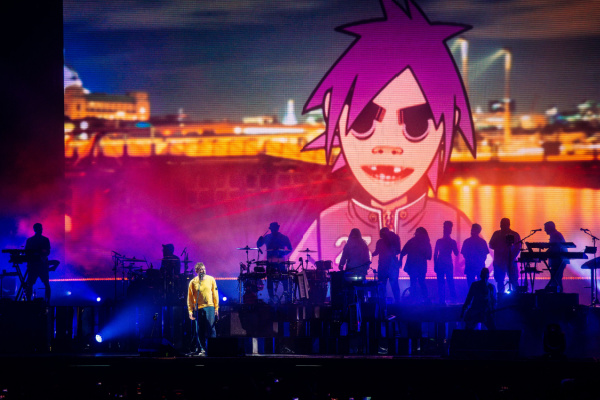 Fans will be able to gain access to these shows by downloading a special app to view these special AR performances, merging real world and computer generated imagery together.

A press release has also added that these shows will allow fans to watch Gorillaz “play in real life as Murdoc, 2D, Noodle and Russel literally tower over them, playing in the midst of two of the world’s most iconic skylines”.

“there’s four of us”

Speaking ahead of these show, Gorrilaz star Murdoc had this to say.

“To all our followers, get ready for the biggest Times Square takeover since that other gorilla smashed the place up. Bigger in fact cos there’s four of us. Thanks to the techies at Google, we’ve created the music video event of the century, so don your pink robes and come see Gorillaz like you’ve never seen us before. The future is nigh!”, he stated.

You can check out fan-shot footage of these performance below.

Last November, Gorillaz celebrated the 20th anniversary of their self-titled debut album, with the release of a special reissue, including demos, B-sides and live recordings.

Among other items, the reissue featured G-Sides, and a previously unreleased vinyl of dub and reggae remix album, Laika Come Home.

The collection which arrived on December 8 last year, also included a dossier of “leaked documents, memos, faxes and some early Jamie Hewlett drawings, assumed lost in a fire”.