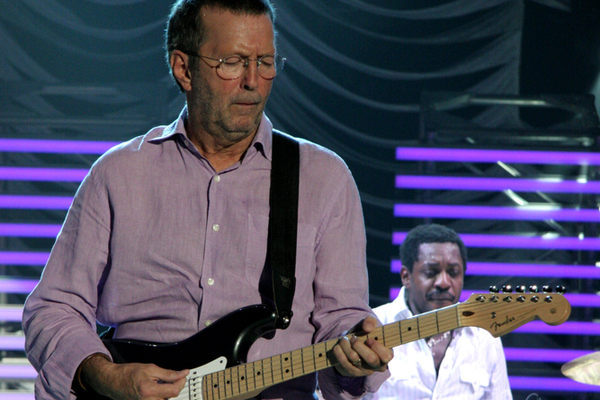 Eric Clapton has said that he not play at venues that require proof of vaccination.

Clapton has always been outspoken in his opposition to lockdown restricitions. Back in December, the singer also recorded an anti-lockdown track with Van Morrison called “Stand And Deliver”. More on that here.

Back in May, Clapton had also said that he suffered “disastrous” side effects from the Covid vaccine.

“I took the first jab of AZ and straight away had severe reactions which lasted ten days. I recovered eventually and was told it would be twelve weeks before the second one”, Clapton wrote in a letter to anti-lockdown activist and architect Robin Monotti Graziadei.

He also wrote, “About six weeks later I was offered and took the second AZ shot, but with a little more knowledge of the dangers. Needless to say the reactions were disastrous, my hands and feet were either frozen, numb or burning, and pretty much useless for two weeks, I feared I would never play again, (I suffer with peripheral neuropathy and should never have gone near the needle.) But the propaganda said the vaccine was safe for everyone”.

And now, following the UK Government’s lifiting of restrictions on Monday, Eric Clapton released his statement.

“Following the PM’s announcement on Monday the 19th of July 2021, I feel honour bound to make an announcement of my own: I wish to say that I will not perform on any stage where there is a discriminated audience present”, Clapton said.

“Unless there is provision made for all people to attend, I reserve the right to cancel the show”.

Back in June, Clapton also claimed that he started to consume “alternative data” about the pandemic. He said that he had researched a group of academics responsible for the Great Burrington Declaration.

These academics have called for a “focused protection” on those most vulnerable to the virus and a return to normal life for all others.

“The more I got into that, the more I realised I was distancing myself not only from the government but from the rest of the public too”, Clapton had also said.

Clapton also said that he considered leaving the UK after his 2020 tour was cancelled. But he said that his collaboration with Morrison received too much criticism stateside.

“The minute I began to say anything about the lockdown here, and my concerns, I was labelled a Trump supporter”, he said. “I got some pretty heavy feedback”.