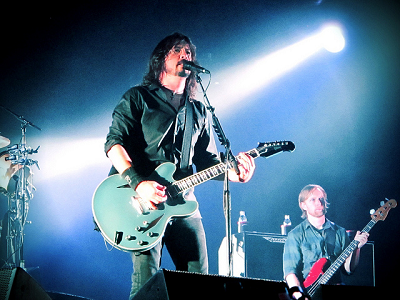 According to Alternative Nation, Foo Fighters have teased that Dave Grohl’s former band, Nirvana, are due to stage a reunion this weekend for a special show at the band’s CalJam festival.

Last night, the rock giants shared two fairly cryptic hints on Twitter that implies a comeback performance could be on the cards The first post came as they spoke about a screening of Joan Jett’s new documentary at the California festival. “CAN’T WAIT!! What else could we have up our sleeves???” Stay tuned….”.

Jett became a member of Nirvana back in 2014 as a one off backing singer for a special show after their induction into the Rock and Roll Hall of Fame. The second clue then came from that very performance with Foo Fighters posting footage of the show on Twitter. “This is a jam”, they posted. The tweet was then retweeted by Nirvana’s official online account.

The suspicions of a reunion were then given further weight by the festival’s line-up too. As well as ex-Nirvana members Dave Grohl and Pat Smear being in Foo Fighters, former Nirvana bassist Krist Novoselic is set to appear with his band, Giants In The Trees.

Joining the line-up will be Deer Tick, whose singer John McCauley also played in the 2014 Nirvana reunion. Foo Fighters are yet to officially confirm the speculation.

Meanwhile, Dave Grohl recently played Nirvana’s ‘In Bloom’ for only the second time since Kurt Cobain’s death. In September, Grohl took to the stage to drum along to the track from ‘Nevermind’ with Trombone Shorty at Los Angeles’ Voodoo Threauxdown Festival.