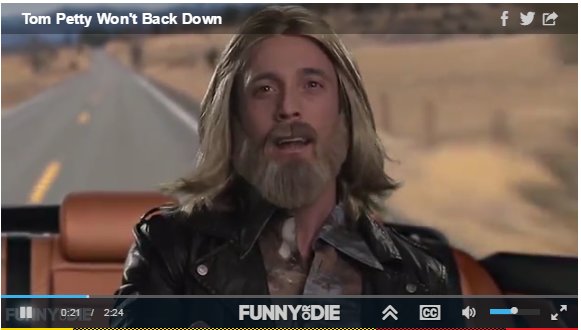 Funny Or Die is produced by Will Ferrell and Adam McKay’s production company Gary Sanchez Productions.

The show’s most well known sketch features Zach Galifianakis presenting a show called ‘Between Two Ferns’. He interviews (rips the piss) out of celebrities such as James Franco, Brad Pitt, Steve Carell and Ben Stiller.

The most recent clip features Tom Petty driving along the highway, listening to the radio and being confronted by the fact that many of his own songs sound very similar to other tracks.

Petty chatted about the songwriting royalties court battle he had with the young singer. The controversy came to light after it was pointed out that Smith’s ‘Stay With Me’ seemed suspiciously similar to Tom Petty And The Heartbreakers’ 1989 tune ‘I Won’t Back Down’.

Petty won the settlement and was awarded a 12.5 per cent writing credit along with singer-compose Jeff Lynne.

Watch the Tom Petty Funny Or Die video below.

A source close to Smith said: “It wasn’t a deliberate thing, musicians are just inspired by other artists and Sam and his team were quick to hold up their hand when it was officially flagged.”

And in fairness to the young English singer he “didn’t try to fight it and amicably dished out royalties.”

Petty appeared to be pretty chilled about the whole incident. Writing on his website, Petty explained: “About the Sam Smith thing. Let me say I have never had any hard feelings toward Sam. All my years of songwriting have shown me these things can happen. Most times you catch it before it gets out the studio door but in this case it got by. Sam’s people were very understanding of our predicament and we easily came to an agreement. The word lawsuit was never even said and was never my intention. And no more was to be said about it.

“How it got out to the press is beyond Sam or myself. Sam did the right thing and I have thought no more about this. A musical accident no more no less. In these times we live in this is hardly news. I wish Sam all the best for his ongoing career. Peace and love to all.”