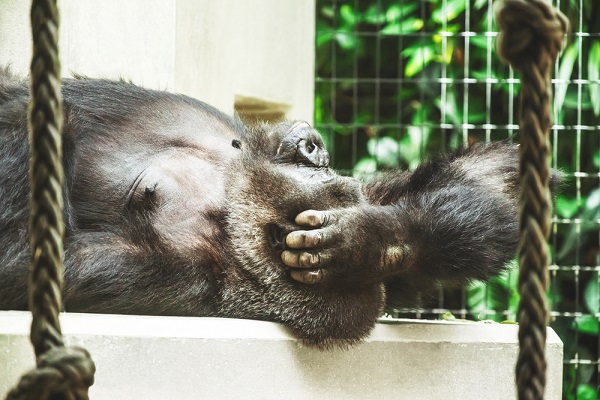 Three Gorillas at the San Diego Zoo Safari Park have tested positive for the coronavirus, as federal officials believe they are the first apes in the US known to be infected.

While other wildlife has contracted the coronavirus from minks to tigers, this is the first known instance of transmission to great apes and it is unknown if they will have any serious reaction.

Zoo officials released a statement on Monday, believing the gorillas caught the virus from an asymptomatic member of staff. The employee had been following safety recommendations and guidelines, including wearing personal protective equipment when near animals.

A group of eight western lowland gorillas are being closely monitored by veterinarians and although they are showing signs of some congestion and coughing, the infected animals are expected to make a full recovery. Executive Director of the zoo, Lisa Patterson said in the statement that aside from showing some symptoms, the gorillas “are doing well”.

Although Patterson said only three are experiencing symptoms, with the gorillas living together in troops, “we have to assume that all members of the family group have been exposed”. They will remain together since separating them could be harmful to the gorillas that live in tight-knit groups.

“This is wildlife, and they have their own resiliency and can heal differently than we do,” Peterson said.

Western lowland gorillas have diminished in their numbers and are considered endangered. According to the World Wildlife Fund, the population of the primates, who can be found in central Africa, has declined by more than 60% over the past two decades.

Zoo officials discovered at least two gorillas had been infected with the coronavirus after they were observed on Wednesday. Tests carried out on Friday by the California Animal Health and Food Safety Laboratory System had shown that the virus was present in the troop’s faecal matter.

However, tests carried out by the National Veterinary Services Laboratories, which provides testing for the US Department of Agriculture, confirmed on Saturday that the gorillas did indeed have the virus.

The San Diego Zoo Safari Park has been temporarily closed since December 6th, amid the lockdown in California. As the pandemic spread across the country, officials said the zoo installed additional protective barriers to separate visitors and “susceptible species”.

The gorillas in San Diego are among the latest animals to become infected with the virus. The first case of human-to-cat transmission was detected in April at the Bronx Zoo in New York City, with a tiger testing positive for the virus. Infected minks, on two farms in Utah, tested positive for the virus, resulting in a massive cull of the furry critters. America’s first coronavirus infection in a snow leopard was detected at the Louisville Zoo in Kentucky in December.

Nearly Half A Million Covid-19 Vaccine Doses By The End Of...