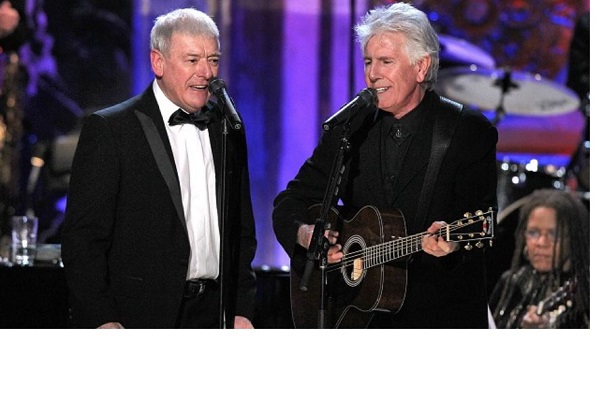 Rock legend Graham Nash has some new and exciting projects on the horizon.

Apart from the forthcoming release of his new picture book A Life In Focus, Nash told ABC Audio that he is to reunite with from Hollies bandmate Allan Clarke.

The pair look set to release a new album together.

Nash confirmed that a new album with Allan Clarke is in the works.

Clarke himself was The Hollies lead singer until he retired from the band in 1999 due to vocal chord issues. He returned in 2019 with a solo album of his own Resurgence.

“I’m actually working on an album with Allan Clarke, my friend since I was six years old”, Nash told ABC Audio. “We’ve been remotely recording. We’ve got eight tracks, and it’ll be a really fun album”.

The 79 year old also added that Clarke’s singing is as great as ever.

“[Allan’s] singing…really, really well,” the musician continued. “He’s a very underrated singer. Allan’s one of the most underrated lead singers in a pop band ever…He’s got a great voice, and it’s back”.

Nash also said that other projects include a possible follow up to his 2016 solo album This Path Tonight.

He also added that he has seven tracks left over from this record, which will feature on this next solo album.

Nash also revealed that he continued to write songs during this Covid-19 pandemic. He has recorded five tracks with touring musicians.

After he records the acoustic and guitar sessions, Nash sends the tracks to Shane Fontayne who adds the bass and guitar to the tracks. This is the beginning of something Nash likes to call “an interesting sonic journey”.

They are subsequently sent to his drummer Todd Cantwell, who fires them on to his brother and keyboardist Toby Cantwell. The tracks are sent back to Nash for the mixing.

Manchester’s Pale Waves Will Play The Academy This October!