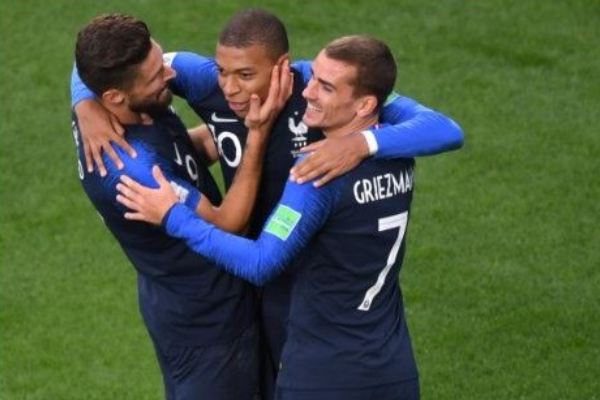 Nearly two weeks of mainly entertaining football, goals aplenty and a bounty of incident, the 2018 World Cup finals saw its first goalless draw Match 37, played out to a backdrop of whistles and anger.

Didier Deschamps’ Les Bleus are through to the knockout stage as group winners, albeit without remotely playing well in any of their group matches, while Denmark are into the last 16 for the first time since 2002.

The sight of the ball being passed backwards and sideways with more than 10 minutes remaining was a step too far for some with loud boos at the final whistle.

Neither France, who had already qualified for the last 16, nor Denmark needed to win while Denmark played with all 11 men behind the ball at times to frustrate France. They had come for a draw.

Meanwhile in Sochi, the already eliminated, but ceaselessly positive Peru secured their first win since 1978 as André Carrillo’s thrilling finish gave Peru’s tremendous fans something to remember their tournament by as Paolo Guerrero, provided a storybook ending to their adventure with a neat effort that neary brought the house down.

The South Americans have provided some great off-pitch spectacles; while the team’s approach has been similarly illuminating and the roar that greeted the image of Ricardo Gareca, the manager, on the big screens before kick-off emphasised that nobody was of a mind to confuse disappointment with failure.

What a noise they produced, then, when Carrillo scored a quite marvellous goal. Australia had, necessarily, started with purpose but were on the back foot when Trent Sainsbury could not get a clean header on a direct ball towards Guerrero.

The Peru captain retrieved possession, got his head up and aimed for Carrillo, who was making ground towards the right corner of the penalty area. The delivery was perfect; the volley, firm and low, was an exhibition of technique and it was probably not the time to remind anyone that Peru had wasted far easier chances earlier against France and Denmark

Today, we witnessed our first 0-0 of the tournament ☹️

Don't cry because it is over, smile because it happened 🙂#WorldCup pic.twitter.com/bAQszQVOzn