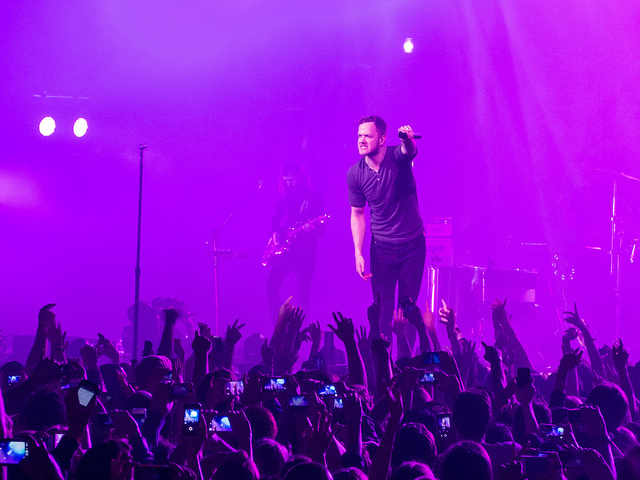 Imagine Dragons have spoken about how their new Smoke+Mirrors tour and how it is going to be “bigger and crazier” than their last tour back in 2012. The reason for their lackluster tour back then, was because when ‘Radioactive’ became a big success for them, the tour had to be hastily put together.

They are no strangers to playing live shows, in fact the Las Vegas band would play four times a week before their breakthrough hit. In a recent interview with Rolling Stone, frontman Dan Reynolds said “We started seven years ago by playing four times a week. We weren’t a band doing one show a month. Since we were in Vegas, we could play all the lounges, so our lifeblood has always been the road”.

Reynolds described how it’s tough being on the road all the time “It’s not the greatest for having a life, a family, or steady things, but it’s great for people who want to constantly be onstage and that’s where we like to be”. Reynolds described the new tour as really playing with the visual elements “We didn’t want to create a magic show, but we wanted to play off visual confusion”.

A lot is being put into the production of the tour and they are reportedly using ‘projection mapping’. Reynolds described the process “it uses projection to create almost 3-D imaging.You project onto things you wouldn’t normally project on. It plays with your sense of perception and your depth of perception and makes you take a second look at things”.

In talking about the set list Reynolds talked about his love of Paul Simon “I really want to do ‘You Can Call Me Al’ by Paul Simon. I think that’s actually a selfish choice, because Paul Simon is such an interesting melody writer. He fits in so many words but it doesn’t feel clunky”.