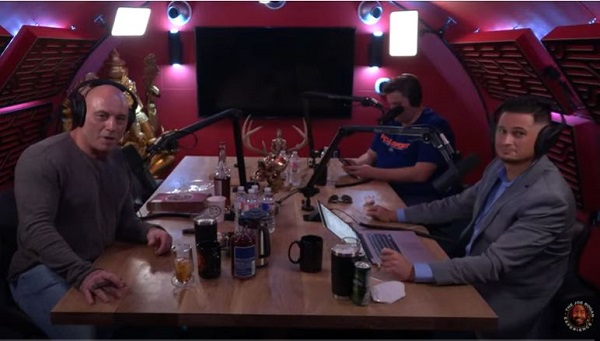 Joe Rogan has shared his thoughts on the chances of Kanye West becoming president in the next US election. The rapper appeared on The Joe Rogan Experience podcast last month where he spoke about his 2020 presidential campaign and vowed to run for office again in 2024.

Podcaster and comedian, Joe Rogan shares his thoughts on Kanye West’s chances of becoming president in the next US election. West appears on episode #1554 of The Joe Rogan Experience and give his perception on running for president.

A confident Kanye declares: “I’m definitely 100% winning in 2024. I was thinking I would possibly be the Democrat.”

During Wednesday’s episode, End Of The World #2, with Kyle Kulinski and Tim Dillon, Rogan reflected on the lengthy discussion.

“The big thing for me was, ‘What are you going to do with the military?’” He’s going to consult Jesus. I like Kanye a lot and I thought that was really interesting. His answer for the military was not something that he just ranted on. That was something he thought about. He said, ‘I would consult experts’.”

Kyle then points out that Donald Trump regularly said he would consult the experts during the 2016 election. To which, Rogan replies “He never said it like the way Kanye did.”

And although he was not saying Kanye West should be president, Rogan thought his thoughtfulness was genuinely impressive.

He added: “Genuinely. I don’t think he should be president but, by the way, he could be.” You can listen to the full podcast here.

Kanye took to Twitter on Tuesday, conceding defeat in the presidential race and announcing his withdrawal. However, the rapper has since reiterated his plans to run again once more in 2024.

Kanye formally ended his campaign shortly after midnight by posting an image of a map of the United States. Its states were shaded in according to those that had so far been won by fellow candidates Trump and Biden.