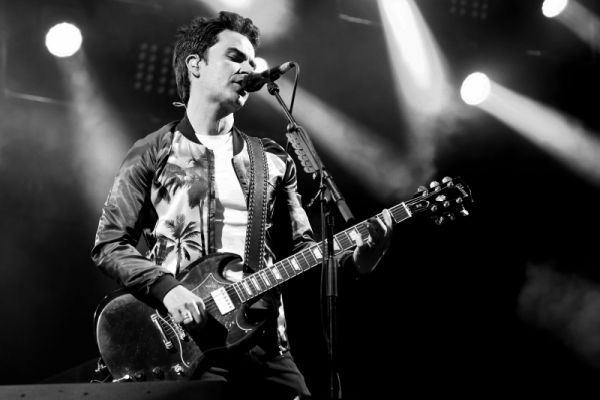 Along with launching his new side project, Kelly Jones has shed some light on the future of his other band Stereophonics.

The side project known as Far From Saints sees Stereophonics lead singer Kelly Jones team up with Dwight Baker and Patty Lynn of Austin band The Wind And The Wave, with an as-yet titled album in the works.

Far From Saints’ album is set to arrive in the Summer. Written and produced by the band itself, it was also mixed by Grammy nominated Al Clay.

The trio have already released their debut single, ‘Let’s Turn This Back Around’, which arrived last Friday (20 January). Check it out below.

While insisting that Stereophonics are still together, Kelly Jones revealed that it was great to take some time away from the band, taking a “little holiday”, as well as working on a new project.

In an interview, the singer assured fans that “Phonics are still together despite his latest venture”.

“There’s no breaking up with the band or anything,” he insisted. “For me, after 25 years of doing all our work, it’s like, I wanna show other sides of what I would like to try creatively”.

“But, there’s no fear that [Stereophonics are] not going to come back and do what we do,” he added. “You know, I’ve got a bunch of songs I’ve got for that but I’m keeping them in the back pocket until we’re ready to do it again”.

Jones even hinted that new music from Stereophonics could also be in the offing.

“So I’ve written new Stereophonics songs, but that time is not for now and the band are all doing their bits and pieces”.

Elsewhere, Jones insisted that Stereophonics have no “expiration date”.

“I think Stereophonics is the type of band and the type of music with a catalogue that’s set in stone plus the new stuff that’s happening. It’s like a revolving door. There’s 12/14-year-old kids in the front row”, stated Jones.

“The band is stronger than it’s ever been in many ways”.

Stereophonics are known for a string of hits throught the 1990s and 2000s, including their UK Number One from 2005, ‘Dakota’.

2021 saw the band release their 12th studio album, ‘Oochya’. Check that out here.