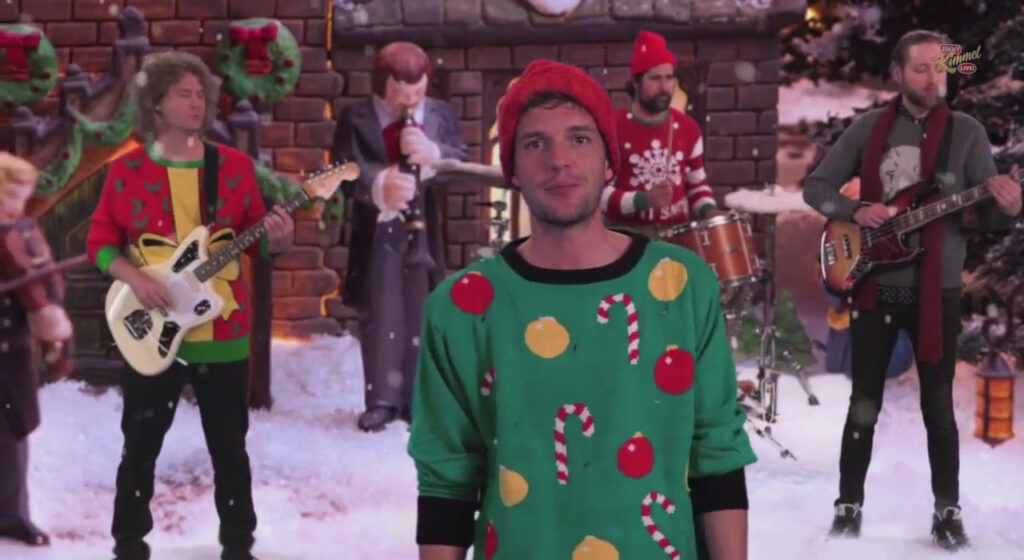 Las Vegas rockers The Killers have shared the secret behind their annual Christmas single tradition, it started after the band turned down an offer from U2’s frontman Bono.

The Irish singer asked the band to do an advert for Gap clothing, as part of Bono’s RED charity campaign.

The ‘RED’ concept began in 2006, with Bono and campaigner Bobby Shriver. The charity (Product) RED, collaborates with established brands such as Nike, Apple, Coca-Cola, Starbucks and Beats Electronics, seeking to raise awareness and funds to help eliminate HIV/AIDS in Africa.

Singer Brandon Flowers told NME: “It really started from being asked to do the RED campaign. Bono asked if I wanted to do a Gap ad. And at the time I was feeling too cool to do a Gap ad, I guess. I’d probably do the ad now. December 1 was Aids Day, so I said, ‘Instead of doing the Gap ad, why don’t we give you a Christmas song?’ And it’s become a tradition now.”

The Killers have released a new Christmas song featuring Jimmy Kimmel and a singing piece of coal named Joel.

‘Joel, The Lump Of Coal’ is the group’s ninth annual Christmas single in support of ‘RED’ AIDS charity.

The single tells the story of a dedicated little piece of coal, that keeps Santa warm. Brandon Flowers sings the chorus: “Joel, Joel, the lump of coal – happy as a lump can be.”

Speaking to NME about the Christmas single, Flowers said: “We watched Back To The Future in Soho in London one night. And of course [the soundtrack is] doused in Huey Lewis. It made me think how much we loved his voice growing up.”

Watch the video for ‘Joel, The Lump Of Coal’ below.