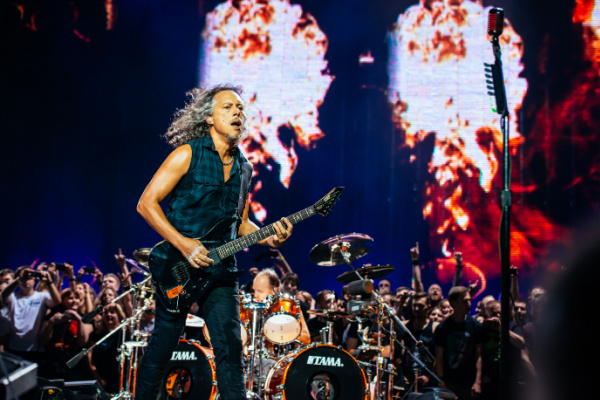 Kirk Hammett has claimed that “toxic masculinity” has helped to sustain Metallica as a band.

The guitarist who joined the band in 1983, revealed in a recent interview that frontman James Hetfield used to also antagonise the audience in the early live shows.

During the interview, Hammett uttered the words, “Toxic masculinity has fuelled this band”.

“I’m still sitting around saying, ‘OK, I’m gonna write a really, really tough, kick-ass riff’. Just look at my rhetoric there: tough, kick-ass riff. It’s an aggression that everyone feels, but it was ratcheted up in us – this weird masculine macho bullshit thing”, Hammett said.

“too heavy for you”

It was at this point that Hammett made his claim regarding James Hetfield.

“Hey, any time this stuff gets too heavy for you… tough s**t!”, he revealed.

On the personal relationships within the band, Hammett also added, “We would get drunk, and just start in. I remember once James got up and pushed Lars [Ulrich, drummer], and Lars literally flew across the room”.

“We would see each other and start wrestling. We could be in a room of twenty people and we’d fixate on each other. No one else mattered”.

This comes just a matter of months after Kirk Hammett had claimed that Metallica has “warned everybody” that streaming services and downloading music would not work as a form of business.

Hammett insisted that his band had warned that musicians would lose “80 per cent of its net worth, power and influence”, over streaming services.

“We warned everyone that this was gonna happen”, he stated.

Adding, “There’s definitely a new way for getting music out there, but it isn’t as effective as the music industry pre-Napster”.

“But we’re stuck with it. There needs to be some sort of midway point where the two come together, or another completely new model comes in”.