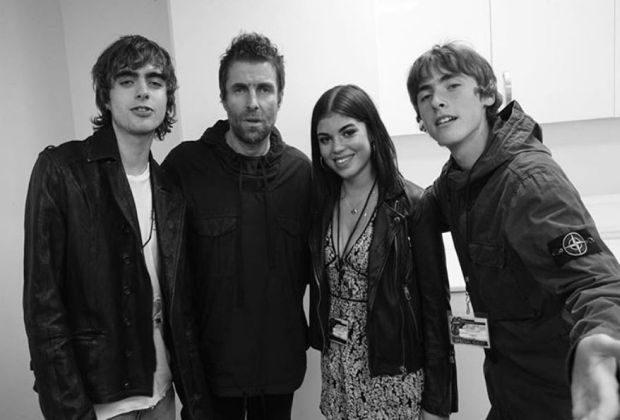 Last week Liam Gallagher posted a photo with his estranged daughter Molly Moorish along with his two sons Gene and Lennon Gallagher. Molly’s mother is Gallagher’s ex, Lisa Moorish. The singer had revealed he’d never met his 20 year old daughter before. Now, in interview with the BBC, Gallagher elaborated further about his relationship with Molly since they’ve reunited.

‘Molly was there [for the] first time, I met her before. It was nice to have them all there. She’s a top girl and she’s all good. We’re getting on good, it’s early days and they’re getting on great, the kids and that.’ Gallagher seemed hopeful about his continued presence in Moorish’s life as a dad, he said,  ‘I hope so, I hope she doesn’t get sick of me, you know what I mean’.

Meanwhile, Gallagher has released a new video for ‘I’ve All I Need,’ a song from his debut solo album As You Were. In the video we see a mix of footage from Gallagher’s performance at last year’s One Love Manchester benefit concert, his recent international tour, and lots of fan interaction in the form of, autographs selfies, and even a Liam portrait tattoo!  There’s brief appearances by David Beckham, Stormzy, and Foo Fighters’ Dave Grohl and drummer Taylor Hawkins.

‘I’ve All I Need’ was filmed and directed by rock documentarian Charlie Lightning, who’s the director of the upcoming biopic on the ex Oasis frontman called Liam Gallagher: As It Was.