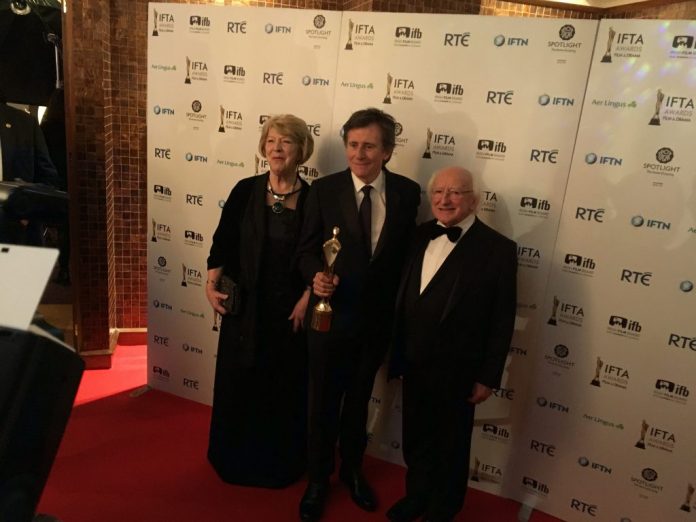 Michael Inside has been named Best Film at The IFTA Film and Drama Awards at Dublin’s Mansion House.

John Connors won Best Actor for his film Cardboard Gangsters taking a swipe at the Irish Film Board who rejected his application for funding what would become the biggest local film at the box office in 2017.

In what Director Jim Sheridan described as the #metoo moment of the night, Aisling Walsh won the Best Director gong for her touching film Maudie.

Gabriel Byrne was honoured by President Michael D. Higgins for his distinguished, decades-long career in film and television, which has seen him appear in more than 75 feature films, accepting the Lifetime Achievement Award.

Saoirse Ronan, who is nominated for her third Oscar this year, won Best Actress for Ladybird and Cillian Murphy won Best Actor for Peaky Blinders but both stars were sadly not in town to accept their awards.

Liam Cunningham was named Best Supporting Actor in the TV categories for his work on Game of Thrones while the show itself one the Best Drama.

The Rising Star Award went to Jacob McCarthy, who played Christopher in The Drummer and The Keeper. I revealed to him he joins a long list of incredible names with the honour including Saoirse Ronan, Michael Fassbender, Domhnall Gleeson and Jamie Dornan…

The IFTA Film & Drama Awards 2018 were hosted by Deirdre O’Kane and will be broadcast on RTÉ One at 10:45pm on Saturday 17th February.

WATCH: The Stars of BEAST 🦁 Roaring In Cinemas