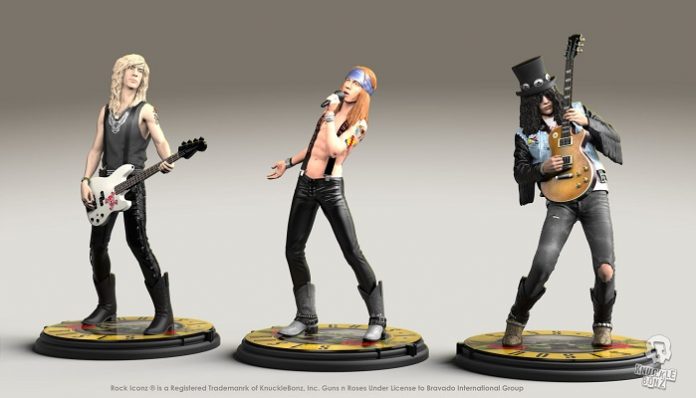 According to founder and creative director Tony Simmons it was a love of clay-mation and hard rock that led to the company’s evolution,

‘ I grew up loving things like clay-mation and the Muppets, combined with a love of the harder side of rock music. My dad was manager at the Kenney Center Concert Hall so was lucky enough to be backstage at shows like Queen and Mahogany Rush and any great rock event that came through Washington, DC. I was the kid sitting behind the stacks at most of these major rock shows.‘

Below are a set of photos of the company’s craftmanship. This particular edition features Guns N’ Roses members. The trio form part of Knucklebonz’s ‘Rock Iconz’ collection. That also includes Megadeth frontman Dave Mustaine and the late Motorhead legend Lemmy.

The statues of Axl, Slash and Duff are 8.5-inches and limited to 3000 each. They are hand-painted, numbered and come with a certificate of authenticity. They are due to be launched this summer on a date still to be announced from the Knucklebonz’s website.

Guns N’ Roses are set to headline this year’s Download festival in the UK and will play other dates across Europe this summer.