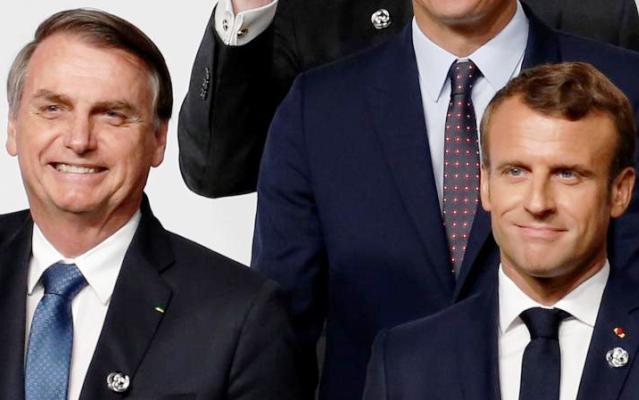 The French president Emmanuel Macron has reacted strongly to the “extraordinarily rude” comments about his wife, Brigitte, by far-right Brazilian leader, Jair Bolsonaro.

When asked to react to statements about him by the Brazilian government, Macron told those assembled at a press conference at the G7 summit that he has been hosting in Biarritz that Bolsonaro “has made some extraordinarily rude comments about my wife. What can I say? It’s sad. It’s sad for him firstly, and for Brazilians”.

Over the weekend Bolsonaro personally expressed approval online for a Facebook post implying that Brigitte Macron was not as good-looking as his own wife, Michelle Bolsonaro.

Amid the destructive ongoing Amazon forest fires this month, Macron and Bolsonaro have been locked in a war of words seen as the worst diplomatic crisis between France and Brazil in 40 years.

Bolsonaro replied on Facebook: “Do not humiliate the guy, ha ha,” after one of his supporters drew unflattering comparisons between the two leaders wives.

“Now you understand why Macron is persecuting Bolsonaro?” next to an unflattering picture of Brigitte Macron, 65, who is 28 years older than Bolsonaro’s wife, Michelle.

France accused Bolsonaro of lying to Macron over his commitment to combating the climate emergency, saying Paris would no longer support the Mercosur deal with Brazil, Argentina, Uruguay and Paraguay.

Macron pointed out that the French overseas territory of French Guiana on the northern coast of South America is France’s biggest land border, so the Amazon was particularly important for France because “we are there”. Bolsonaro then publicly attacked Macron for what he called a “colonialist mentality”.

Our house is burning. Literally. The Amazon rain forest – the lungs which produces 20% of our planet’s oxygen – is on fire. It is an international crisis. Members of the G7 Summit, let's discuss this emergency first order in two days! #ActForTheAmazon pic.twitter.com/dogOJj9big