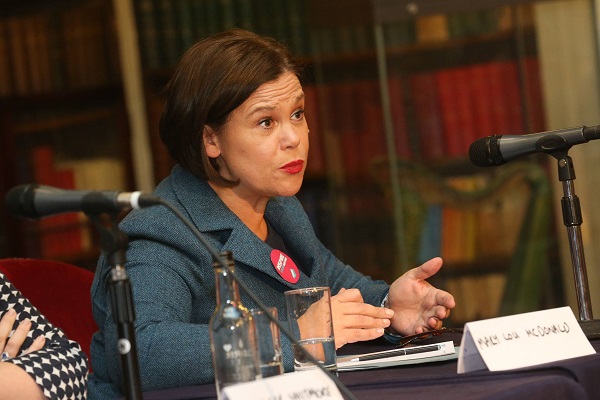 Mary Lou McDonald is set to be the new Sinn Féin leader. The outgoing party president Gerry Adams has confirmed Deputy McDonald is the only person nominated to succeed him. Mr Adams has held the position since 1983.

He will hand over the leadership at the party’s Ard Fheis next month. In a speech at the Balmoral Hotel in west Belfast Mr Adams said,

‘This will be my last speech as Uachtarán Shinn Féin to the Cúige, nominations for that position closed yesterday. So if you didn’t get a nomination and wanted this job it’s too late now. Please welcome the President elect of our party, Mary Lou McDonald.’

Ms McDonald spoke after after Mr Adams. She said republicanism is entering a new era with confidence as we move closer to Irish unity.

‘I am proud and honoured to be nominated for Uachtarán Shinn Féin. I look forward to being ratified at our special Ard Fheis on February 10th.’

‘I feel an enormous sense of pride being at this gathering with you, I would like to thank all those who nominated me. I don’t for a moment underestimate the scale on a personal level and on a professional level. I never thought come February 10, I would be the boss man!’

Ireland Could Face A Worker Shortage