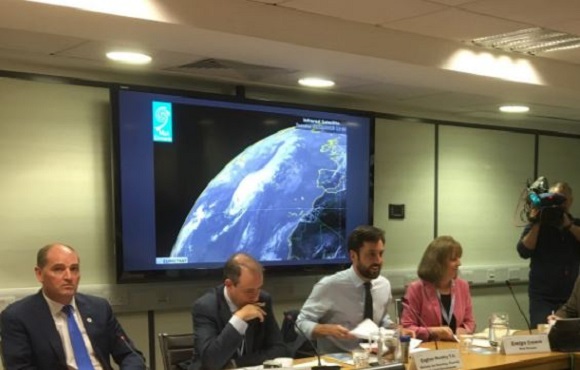 Storm Lorenzo could result in “ferocious” and “very dangerous” storm and wave surges around coastal areas when it reaches these shores this coming Thursday and Friday.

Met Éireann has warned of very wet and potentially stormy conditions over parts of the country later this week due to Hurricane Lorenzo.

Lorenzo is currently a large and powerful hurricane and its hurricane and tropical-storm-force winds are expected to expand further during the next few days.

Although Lorenzo is currently a hurricane, it will be a storm when it hits Ireland on Thursday.

⁦@MetEireann⁩ briefing the National Emergency Coordination Group on #Lorenzo this afternoon. Please keep a check on the ⁦@MetEireann⁩ weather warnings and advisories to be issued from tomorrow morning on the impacts on Thursday, particularly the impact of high seas pic.twitter.com/qqS1W1Rflt

Housing Minister Eoghan Murphy, who held a meeting of the National Emergency Co-ordination Group yesterday, told reporters that the severity of the storm once it hits Ireland is “still to be determined”.

He said the storm could also bring high winds and potentially cause flooding in some areas.

“People will recall we’ve had strong wind events before, Storm Ally, Storm Ophelia, and how dangerous it was in terms of trees, heavy with leaves, falling, bringing down power lines, causing flooding in certain areas,” he said.

Mr Murphy said every local authority has been contacted to ask them to monitor Met Éireann’s forecasts, and prepare for storm impacts by activating crisis management and local co-ordination arrangements.

There’s A Mugger On The Loose!