The NME reports that Mozza is about to release ‘I Am Not A Dog On A Chain’, in March of next year.

This will be his 13th solo record from the Mancunian troubadour. His website, Morrissey Central, reports that the album is due for release in March 2020 and will be his final drop on BMG Records. 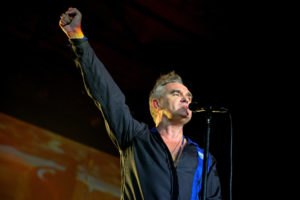 Collaborating with his long-standing producer Joe Chiccarelli,  the record was recorded in Saint-Remy, France,

He has described the record as “the very best of me … too good to be true … too true to be considered good …”. Check out the tracklisting in full below.

Love Is On Its Way Out

Bobby, Don’t You Think They Know?

I Am Not A Dog On A Chain

What Kind Of People Live In These Houses?

Darling, I Hug A Pillow

Once I Saw The River Clean

The Truth About Ruth

The Secret Of Music

My Hurling Days Are Done

While BMG are yet to officially confirm the release, the post on the site asserts that ‘Bobby, Don’t You Know’ will be the first single to be lifted from the record.

This will be Mozza’s first long-player since 2017’s ‘Low In High School‘, and follows his 2019 cover album ‘California Son‘.