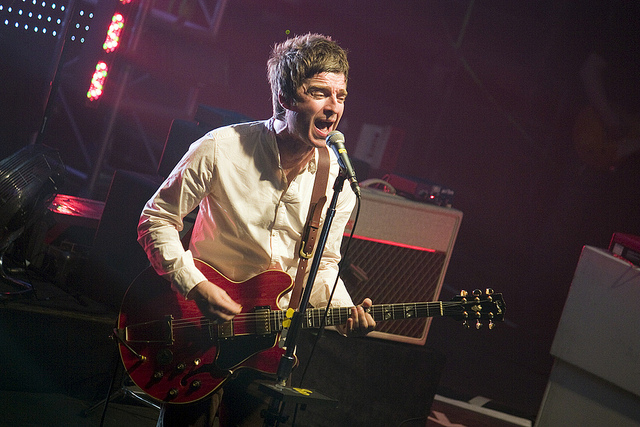 Noel Gallagher listed his favourite albums of all time for iTunes, including bands such as The Beatles, The Rolling Stones, Kings Of Leon and our very own U2.

The singer-songwriter has written a small description after each LP, to explain why he thinks that particular record is so great and he’s explained which albums were the biggest influences on music in general and him.

The Wall – Pink Floyd.
“The scope, the vision, the story, the iconic guitar playing – not to mention the songs! I know every single word of it…staggering.”

The Joshua Tree – U2.
“There’s not a lot you can say about it really. ‘Where The Streets Have No Name’? ‘Still Haven’t Found What I’m Looking For’?
‘With Or Without You’? ‘Running To Stand Still?’ If you haven’t got a copy you’re a knob… The end”

Revolver – The Beatles.
“The ’90’s would never have happened without this album.”

We Are The Village Green Preservation Society – The Kinks.
“Probably the most underappreciated album of all time. Ray Davies was the unsung hero of the ’60’s…Storytelling of THE MOST HIGHEST ORDER.”

Her Satanic Majesties Request – The Rolling Stones.
“Everyone thinks it’s s**t…The Rolling Stones think it’s shit!! (Although there is a track on it which is basically just some f**ker snoring…which IS s**t…) I f**king LOVE it!!”

Tonight’s The Night – Neil Young.
“Heartbreaking, alcohol fuelled, darker than dark and bleaker than the inside of Thom Yorke’s Christmas crackers…the sound of almost falling apart…don’t listen to it if you’ve fallen out with your bird…or boyfriend…or your cat even!!”

Youth And Young Manhood – Kings Of Leon.
“Before they did that thing that most bands do…y’know…discover reverb and try and sound like
U2? Yeah?…well BEFORE that they were unbelievably good…listen to this and tell me I’m wrong.”

The Stone Roses – The Stone Roses.
“It doesn’t sound like it now but at the time this really did seem like it came from another universe…at that moment they were the greatest band of all time.”

The Ultimate Collection – The Who.
“Undoubtedly the greatest singles band of all time…laughable at how many truly great youth anthems Pete Townshend wrote…equally as laughable that is called the ULTIMATE collection and they’ve released about 20 “Best Of’s” since!”

The Hacienda Classics – Various Artists.
“You really should’ve been there…one of my most treasured musical possessions…the sound of my youth. When it came out, it transported me right back into some of the greatest nights of my life. It never EVER lets you down…”

The Next Day – David Bowie.
“No matter how hard they try (and they will try!) they’ll never beat the jaw dropping moment when ‘Where Are We Now?’ was aired…the whole thing was mind blowing…properly mind blowing. A masterpiece.”

Behind The Music – The Soundtrack Of Our Lives.
“It changed the way I wrote music. Probably the biggest influence on my thing (whatever that is?!) since The Beatles.

Snap! – The Jam.
“Weller the teenager writing teenage anthems…rare as a decent B-side these days! No point in listing them, there’s too many. Intense and unrelenting and he was only 23 when they split up!!!”

The Specials – The Specials.
“Easily one of THE great British albums of all time. The sound of the school playground! It really did unite people…EVERYBODY loved them!”

Kontiki – Cotton Mather.
“I bought this on the strength of an interview that mentioned it sounding like Dylan and The Beatles…and you know what? For once the hack had called it correctly!!”

The Queen Is Dead – The Smiths.
“I can still remember the ride home from Piccadilly Records in Manchester after buying it and thinking – how are they gonna top Meat is Murder? – the minute the needle hit the record and that psychedelic intro to the title track fell out of the speakers, all doubt was blown away. There’s nothing left to say about it that hasn’t already been said…THE F**KING BOLLOCKS!