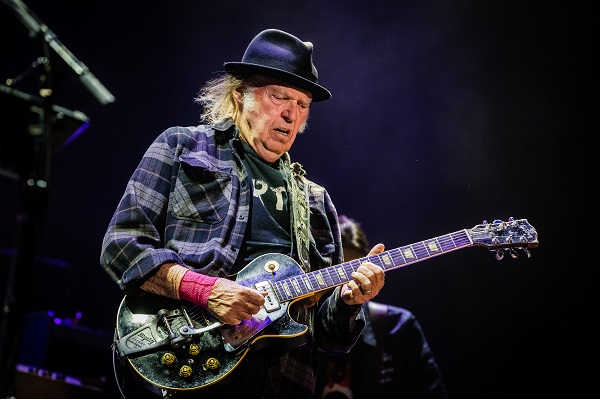 Neil Young is to release a previously shelved album that he made with Crazy Horse.

Arriving on July 8, the album ‘Toast’, had been shelved because it was “so sad”, according to Young. You can also pre order the album from Amazon here.

The album contains seven tracks, includng ‘Standing In The Light Of Love’, which has already been released by Young. Check that out and the album’s tracklist below.

“Couldn’t put it out”

Neil Young took to his Archives website to explain why it has taken so long to release this 2001 record.

In a since deleted post, Neil Young explained that the album was “so sad”, that he just “couldn’t put it out”.

“Toast is an album that stands on its own in my collection. Unlike any other, Toast was so sad that I couldn’t put it out”, Young wrote. “I just skipped it and went on to do another album in its place. I couldn’t handle it at that time. 2001”.

“The music of Toast is about a relationship”, he continued. “There is a time in many relationships that go bad, a time long before the breakup, where it dawns on one of the people, maybe both, that it’s over. This was that time”.

“The sound is murky and dark, but not in a bad way. Fat,” he wrote. “From the first note, you can feel the sadness that permeates the recording. … I had forgotten about these songs, put them out of my mind and went on living my life”.

Neil Young also paid a glowing tribute to his band Crazy Horse, hailing them as the “greatest group I have ever met”.

“It must be said that here Crazy Horse shows a depth never seen or heard before”, Young added. “The greatest group I have ever met. This is a pinnacle. Where they let me go, where they took me, was unbelievable. I couldn’t stay”.

Last December, Neil Young also released another archival record, Summer Songs, which had been first recorded by the country singer in 1987.

On the lyrics, Young stated that they were, “significantly different from their subsequent master album releases.” Some of the tracks feature “completely new and unheard verses”.

“It is a beautiful listen, created over a short period of time, that influenced four albums”, he added. More on this here.