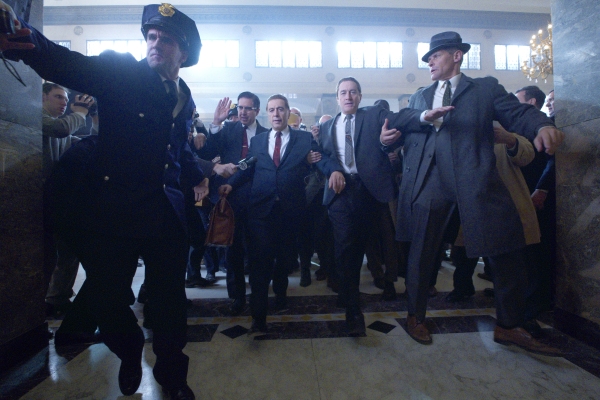 Netflix have released a pair of images from the impending and highly anticipated release of the Martin Scorsese directed ‘The Irishman’ starring Scorsese’s frequent on-screen collaborator Robert De Niro as well as fellow screen heavyweight Al Pacino and Joe Pesci.

The movie blurb states that its ‘an epic saga of organized crime in post-war America told through the eyes of World War II veteran Frank Sheeran, a hustler and hitman who worked alongside some of the most notorious figures of the 20th Century.’

‘Spanning decades, the film chronicles one of the greatest unsolved mysteries in American history, the disappearance of legendary Union President Jimmy Hoffa, and offers a monumental journey through the hidden corridors of organized crime: its inner workings, rivalries and connections to mainstream politics.’

The Netflix film, the legendary director’s ninth collaboration with star Robert De Niro, was adapted by Steve Zaillian from Charles Brandt’s book ‘I Heard You Paint Houses’, about Frank Sheeran (De Niro) a high-ranking Teamsters official with ties to the Bufalino crime family who confessed, shortly before his death in 2003, that he killed fellow Teamster leader Jimmy Hoffa, whose body has never been found. Pacino plays Hoffa.

The film has cost in the region of $200m according to industry reports with the extensive use of de-aging CGI processes to make many of the movie’s protoganists appear youthful in what is a plot drawn from organised crime over several decades.