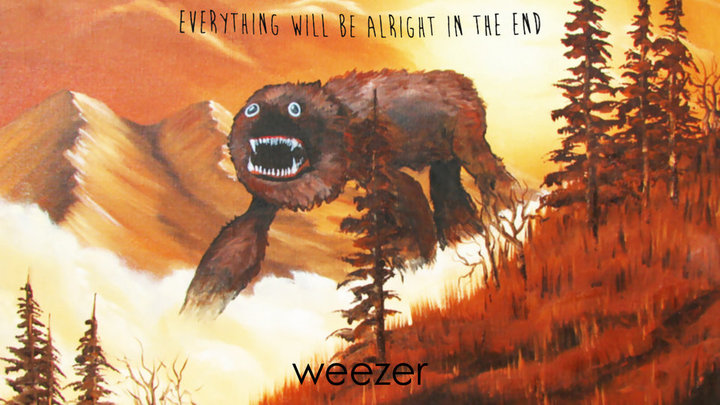 The Californian rockers, known for their hilarious iconic video ‘Buddy Holly’, divulged plans of a new record Everything Will Be Alright In The End, set for a September release.

The band broke the news on their YouTube channel. The alt-rockers have a weekly webseries ‘WeezerWednesday’. On the latest webisode, Weezer shared the name of the new album and some artwork. The forty second video clip features the song ‘Return to Ithaca’.

Everything Will Be Alright In The End is rumoured to be a return to form for the band. Weezer worked with producer Ric Ocasek (The Cars), who previously produced the band’s debut The Blue Album in 1994, that focused attention on the single ‘Buddy Holly’ and The Green Album in 2001 that featured the smash hits, ‘Hash Pipe’ and ‘Island In The Sun’. It’s fair to say that Mr Ocasek seems to get the best from Weezer.

“Ric wasn’t the obvious first choice for us. Eventually, as we meditated on all the different options, it dawned on us that the vibe we wanted and the sound we wanted and the energy we wanted, there was no one on Earth who could get that better than Ric.”

This is Weezer’s 9th studio album and first record since Hurley in 2010. In an interview with Entertainment Weekly, Drummer Pat Wilson described the new LP as a blend between The Blue Album and Pinkerton.

In case you’re visiting from another planet and have never seen the ‘Buddy Holly’ video, enjoy.