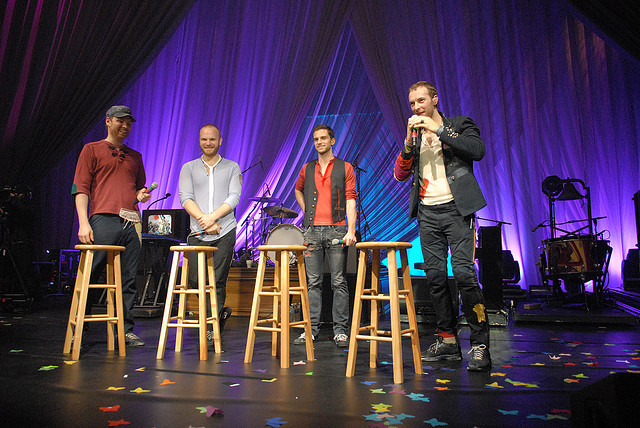 Noel Gallagher obviously never paid any attention to the saying ‘If you don’t have anything nice to say, don’t say anything at all.’

The Mancunian singer’s been slagging poor old Coldplay, claiming that when the band release their upcoming album, Chris Martin will have to hand-deliver it to fans.

The jibe was a reference to U2’s LP giveaway with Apple. In September, the Irish rockers put out Songs Of Innocence on iTunes for free download for 500 million Apple users.

Noel is quick to point out that “For the record, no-one’s getting anything out of me for free.”

In an interview with Radio 4’s John Wilson, Gallagher said: “I don’t agree with music being given away for free because it costs a lot of money to make a record. Look, [U2] obviously don’t need the money, good for them, but it’s not something that I would ever consider…”

Noel mused on the recent changes in the music industry, citing Radiohead’s 2007 album ‘In Rainbows’ as the catalyst.

“All this started with Radiohead didn’t it, and people have been reacting to that ever since… I remember the Kaiser Chiefs were like, ‘Make your own record, we’ll give you a pound.’ What? You’re giving people a pound?”

Gallagher concluded with a little dig at Coldplay. “It remains to be seen how Coldplay react to it. I firmly believe we’ll all get a knock on the door at some point over the next two years and Chris [Martin] will be stood there. And he’ll say, ‘Alright man, you know, here’s a Coldplay album.’ And you’ll go, ‘Thanks.’ And there’s a ladder and he’ll say, ‘Bass player’s just fixing the guttering, Johnny’s round the back, he’s doing the gardening and I think Will’s going to put the recycling out, so enjoy.’ And then he’ll come back and say, ‘Oh, I forgot – here’s a tenner.’ Who knows what’s going to happen. But for the record, no-one’s getting anything out of me for free.”

The full interview will be broadcast at 11pm today Monday 8th December on BBD Radio 4.