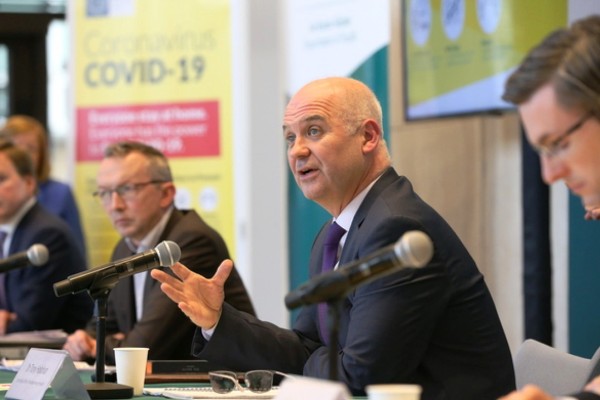 NPHET have sent a letter to the Government, urging all pubs and restaurants to be closed on December 28.

The Taoiseach Micheál Martin earlier said Ireland may be put under further restrictions by the end of the year. This comes following an increase in cases in the country.

In this letter, NPHET have reportedly stated that all bars and restaurants must be closed from December 28.

The Cabinet is to meet next Tuesday, where they are expected to make their decision regarding restrictions. See more here.

On this increase in cases and the incidence rate, Taoiseach Micheál Martin said,“We will give people plenty of notice on whatever decisions the Government take, but we are mindful of the rising numbers. When they get to a certain level, they can rise exponentially”.

Táiniste Leo Varadkar had confirmed on Prime Time that the Cabinet was looking at shutting down bars and restaurants again before the end of the year, in a bid to curtail the spread of Covid-19. See here.

Bar and restaurant owners have slammed the Government, following the announcement that they will probably be asked close before the end of 2020.

A spokesperson for the Licensed Vinters Association said in a statement, “This is yet more devasting news for the sector”.

They added, “How can an entire industry be expected to keep going like this? Allowed to open up and then shut down again after 3 weeks?”

“The implications this will have on staff, on stock, on bills and on the metal health of those working in hospitality is going to be enormous”.

“This is another disproprotionate response which shows how limited the Government and NPHET are. It shows how poorly thought out the approach is and how narrow their focus is”.

“Yet again its the hospitality sector being picked on for a rise in infections occuring in settings across the economy and the country”.

The Chief Executive of the Vinters Federation Padraig Cribben had his say on the matter.

“This latest announcement caps an utterly disastrous year for the pub sector”.

“Bars serving food were given a chance to trade next year, but now that’s been snatched from them”.

Mr Cribben continued, “The prolonged uncertainty has placed our members in the cruellest of limbos where there is zero clarity from decision makers about the trade’s future”.

“It’s obvious that closing hospitality is NPHET’s only lever to pull. Non-essential retail will remain open while people will congregate in homes throughout the Christmas period”.

“A potential shut down date of December 28 will effectively close many businesses on Christmas Eve as few will wish to re-open for a couple of days. But they will now have to close again. It’s a complete mess”.

Video: Bizarre Ice Object Grows In River In The States