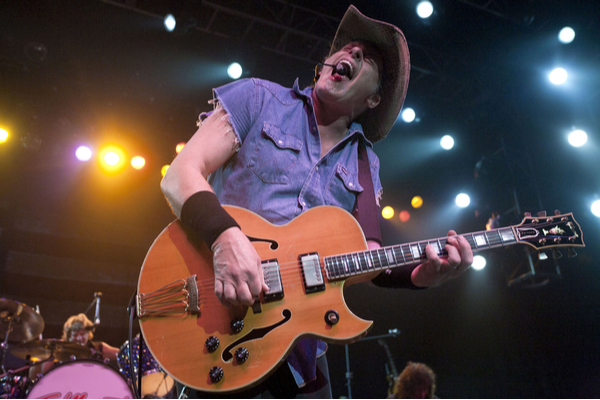 Ted Nugent has opened up about the darkest days of his battle with COVID-19, saying “I didn’t think I was gonna make it”. The rocker recently revealed that he had contracted the coronavirus, following continuous ranting, and denying its very existence.

A week on from his announcement, the outspoken rocker discussed his experience during an episode of his internet show, Ted Nugent’s Spirit Campfire. The 72-year-old had previously claimed the virus was “not a real pandemic”, described how bad it had affected him to co-host, John Brenkus.

“I never am a sympathy guy,” revealed Nugent. “I’m a tough guy. I’d rather err on the side of ‘tough guy.’ Five [or] six days ago, it was really scary. I didn’t think I was gonna make it. I literally couldn’t function for about 20 hours, and then they came, and they rescued me… I’ve never been so scared in all my life.

“I’ve had the flu three or four times in my life. I’m in bed and I’m giving birth to swampage — I mean, I go through six boxes of Kleenex an hour,” revealed Nugent. “Okay, that’s the flu, and you’ve got a headache and you’ve got body aches. Maybe you’ve got some diarrhoea, and just overall pain”.

Nugent said he does not struggle to express himself as he described the “six-foot-two, 225-pound headache” as like nothing he has had before. He said he was dizzy and weak “from the tips of my toes to the top of my hair” and struggled to get up to go to the bathroom. The rocker said he would lay in the bathtub a couple of times a day with the water “as hot as I could take it just to divert”.

Despite catching the virus, Nugent reiterated his previous stance that he will not be getting the vaccine, mocking people who wear face masks, despite that both the CDC and World Health Organization have urged their use worldwide.