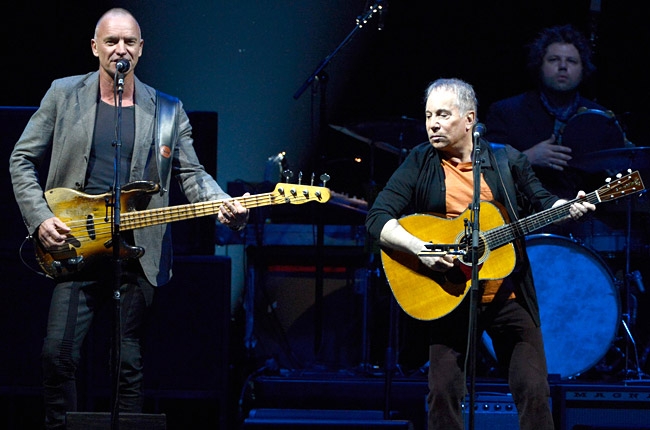 Two music legends, one stage and an Irish date!

Paul Simon and Sting will play the 3Arena in Dublin as part of the European Leg of their On Stage Together tour next year.

The Police frontman and one half of the Simon and Garfunkel duo first took to the stage together last year at a benefit for the Robin Hood Foundation – a charity seeking to end poverty in NYC.

After a great reception, the duo then took the show on the road and have since toured North America together.

Fans are promised “an unforgettable night of music” with both aritsts performing their legendary hits such as ‘Every Breath You Take’, ‘Fields of Gold’ and ‘Boy In The Bubble’.

And more good news for Sting: he’s been selected to receive this year’s Kennedy Centre Honours.

He joins Al Green and actor Tom Hanks in accepting the accolade at the ceremony on December 7th.

Last year’s recipients included Billy Joel and Carlos Santana, while Led Zeppelin were among the honourees at the 2012 ceremony. Robert Plant, John Paul Jones and Jimmy Page were seen to shed a tear when Heart performed a stunning rendition of ‘Stairway To Heaven’.

The Paul Simon & Sting On Stage Together Tour kicks off in Krakow, Poland on March 12 and will visit Oslo, Paris and London as well as a date at the 3Arena in Dublin on April 7th, 2015.

Tickets, from €39.05 including booking fee, go on sale this Friday, September 12th at 9am from Ticketmaster.

Here’s a taster of what’s in store from a recent date in Texas.

‘Moby Doc’ To Explore The Star’s Addiction And Depression Issues In...