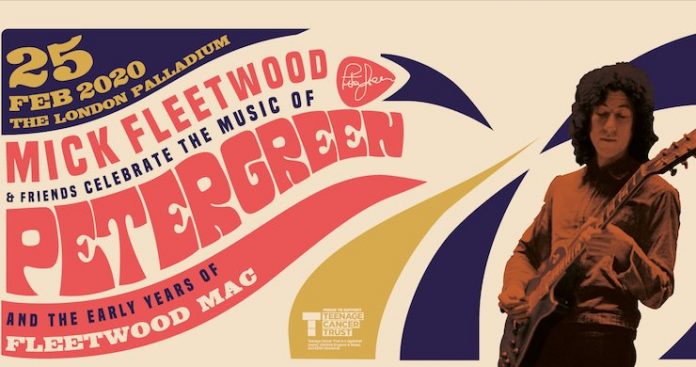 Mick Fleetwood, drummer with Fleetwood Mac has revealed that he has recruited an all-star lineup of special guests to help him honour the band’s founding member Peter Green.

After Eric Clapton parted ways with John Mayall, Peter Green stepped in and the time spent with Mayall would make him a guitar legend.

Antimusic reports that Green then enlisted his favorite rhythm section of Mick Fleetwood and John McVie to form a new group that he named after the musicians, called Fleetwood Mac.

Mick intends to celebrate that original band line up and its founder with a special event on February 25th at the London Palladium. The drummer had this to say of the special show:

“The concert is a celebration of those early blues days where we all began, and it’s important to recognize the profound impact Peter and the early Fleetwood Mac had on the world of music.”

“Peter was my greatest mentor and it gives me such joy to pay tribute to his incredible talent. I am honoured to be sharing the stage with some of the many artists Peter has inspired over the years and who share my great respect for this remarkable musician. ‘Then Play On’…”

A donation from the event will go to Teenage Cancer Trust

.@MickFleetwood will lead a night of music in tribute to original @fleetwoodmac guitarist #PeterGreen at the @LondonPalladium early next year with performances from @IamStevenT, @_DavidGilmour, Christine McVie, and more. https://t.co/uajPPlfKm3

New Damon Albarn Musical Due Out This Summer