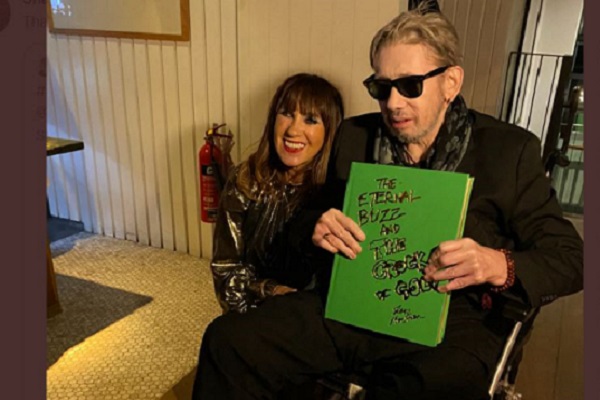 Shane MacGowan has launched his latest book The Eternal Buzz and the Crock of Gold.

The book itself contains a set of school essays, drawings, illustrations, along with previously unseen or unpublished hand written lyrics which were written by the Pogues music legend himself.

The book was launched in Ireland at Dublin’s Park Cafe by MacGowan, along with family, friends and his fans earlier this week.

The book also represents 60 years of Shane MacGowan artwork, including drawings of Grace Jones, Bono, and Kirsty McColl. It also includes love notes and even some cocktail recipes.

Shane MacGowan’s wife Victoria Mary Clark had also revealed that she siffed through some items that she had been collecting for over three decades.

She also added that she felt as though she had “unearthed treasure”, when she realised the amount of material that she discovered.

The book has also been described by art critic Waldemar Januzczak as a ‘splattering onto the page in a psychic storm of lines, words and colour”.

Former Pogues frontman Shane MacGowan has already launched this book in London, where he was also spotted partying with close friend Kate Moss. Moss has been a long term friend of MacGowan and his wife Victoria.

She also added, “I am completely knackered and overwhelmed by the support and the energy and enthusiasm and everything that happened, and by so much LOVE from so many beautiful, wonderful people”.

Find out more from this via Nova’s report here.